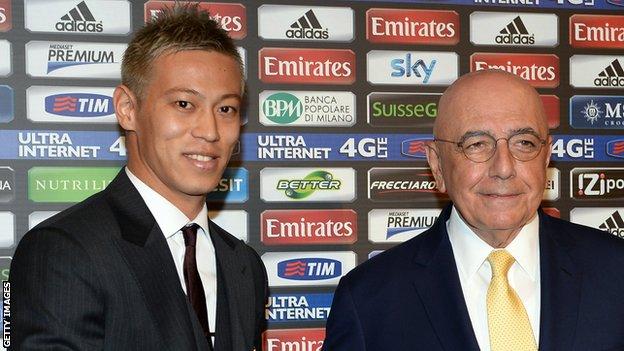 Japan midfielder Keisuke Honda said he was "destined" to play for AC Milan after joining from CSKA Moscow.

Honda, 27, has signed a three-year deal with the Italian giants on a free transfer after his contract with the Russian champions expired.

"My career was destined to be here and my heart was set on Milan."

Honda, who has 20 goals in 52 appearances for Japan, will take the number 10 shirt at Milan.

The midfielder was presented to the media on Wednesday, with 50 Japanese journalists among the 110 present.

He said: "I think that Kaka and Mario Balotelli are the number ones in the world and I am looking forward to playing alongside them. We will try to win the title next year and become champions together.

"I wanted to come here, to be a champion here with the club, but I am thinking about the Champions League. I know all the players and as a child I watched the matches on TV every week.

"Serie A is the most famous league in Japan, I can't say just one player, I like many and respect many so it is hard to say."

It is not known whether Honda will make his debut away to Sassuolo on Sunday, with the Rossoneri 11th in the table.