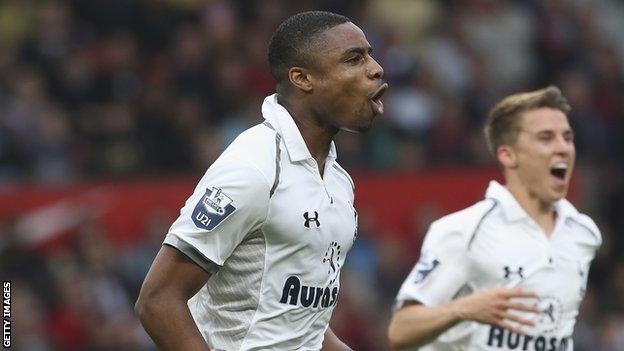 The 23-year-old has had nine previous loan spells away from White Hart Lane.

Meanwhile, Brighton have turned down a transfer request by midfielder Liam Bridcutt.

The Seagulls have confirmed they had received a transfer request from the 24-year-old Scotland international on Tuesday.

Our target was to bring an extra striker into the squad, alongside Leo Ulloa and Ashley Barnes, and as cover for Craig Mackail-Smith and Will Hoskins

Bridcutt has been linked with a move to Sunderland, where former Albion manager Gus Poyet is in charge.

New arrival Obika made his first-team debut for Spurs in a Europa League tie in November 2008 and has made four senior appearances for the north London club.

He joined Yeovil on loan in March 2009 for what was the first of four separate loan spells with the Glovers. He has also spent time at Millwall, Crystal Palace, Peterborough, Swindon and Charlton.

Obika has previously worked with current Brighton assistant coach Nathan Jones during his stints at Yeovil and Charlton.

In total the former England Under-20 international has scored 23 goals in 105 league appearances.

"Jonathan is someone we have been aware of for some time," Brighton head coach Oscar Garcia said.

"It is known that we tried to bring him earlier in the season, but were not able to due to an injury, so we are pleased to have him here now.

"Our target was to bring an extra striker into the squad, alongside Leo Ulloa and Ashley Barnes, and as cover for Craig Mackail-Smith and Will Hoskins as they continue their respective comebacks from their injuries."

Leroy Lita has returned to Swansea after his loan spell at the Amex Stadium came to an end.