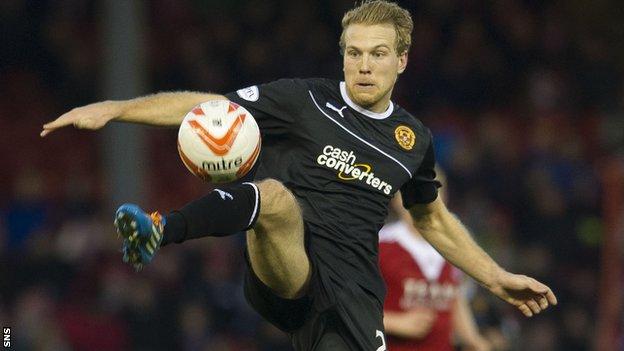 Motherwell manager Stuart McCall says the club should know by Thursday whether they will be able to retain striker Henri Anier.

The Estonia international has been on loan from Viking Stavanger since the summer but the Steelmen are trying sign the 23-year-old on a full-time basis.

"It all just boils down to finance. Henri is desperate to stay."

McCall revealed he may have to move players out on loan to fund a deal for Anier, who has scored seven goals for Motherwell this term.

"Certainly, the club are trying really hard and we're waiting on an answer from Henri and his representatives early tomorrow morning," explained the manager.

"I know his club won't let us extend his loan any more. Obviously, there's no fee involved, which helps.

"I think us as a club, Henri and his agent would be looking to do something like Henrik Ojamaa did.

"It will be a great opportunity for him [Anier] because he's settled in well and he loves being here.

"It's a good family club, it's got a lot of players that look after each other.

"With the offer we're making him, he will take a big cut in his wage if he's to stay. So, for him even to be thinking about it is great."

Dundee loaned goalkeeper Dan Twardzik to 'Well in December after Lee Hollis sustained an injury and the latter's fitness is still being assessed.

"Lee had an injection in his ankle," said McCall. "We were hoping that would help him, it helped him slightly.

"He's still in a position where we're not really sure if he's going to need an operation, so it's a difficult one.

"With Dan, what more can he do? He played five games, we won all five and I think he only conceded two goals so he was terrific for us.

"At this stage, he's back at Dundee but I'm sure with his good form he's alerted a lot of clubs. It's one that we would look at and we'll see what happens in the future on that."

Meanwhile, McCall doubts whether Motherwell will be able to offer a new contract to defender Shaun Hutchinson.

"I would've been confident of him signing an extension if we'd have got through in the [Scottish] Cup but we certainly couldn't offer a bigger financial package to extend his deal," he added.

"From the club's point of view, we're going to miss out on money for him.

"I'm quite sure he'll be here until the end of the season but unfortunately then he'll have his choice of clubs.

"He's played a lot of football for us. We would love to keep him but ideas of us being able to offer him a decent contract are not there at the moment and we'll see what happens in the summer. But it would be probably be doubtful."