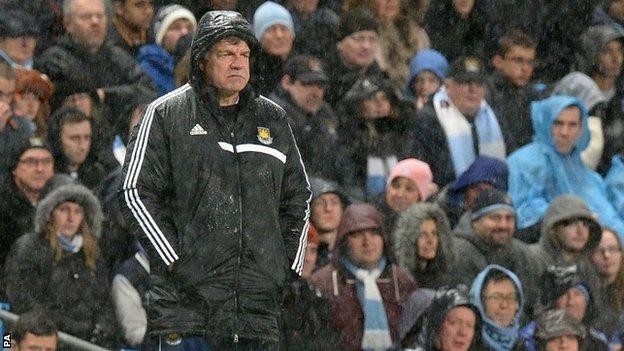 Sam Allardyce says he will fight on as West Ham United manager - despite abuse from angry fans during the Capital One Cup thrashing at Manchester City.

"When you are not doing well, you get stick - and I'm getting stick," he said. "That's the way it goes and that's the way this job is."

Allardyce added that neither he nor his players could afford to be downhearted for long, with a crunch Premier League game against Cardiff to come on Saturday.

"It is my job first thing in the morning to get the players up," he said. "We have got to get our heads up, shoulders back and chests out and try to bounce back, starting with Cardiff City at the weekend."

Allardyce's side are next to bottom of the Premier League as they prepare for Saturday's trip to the 17th-placed Bluebirds.

West Ham co-owners David Gold and David Sullivan wrote an open letter in support of Allardyce before the game - but no such goodwill was offered up by furious supporters at the Etihad Stadium.

The patience of West Ham's fans finally snapped after City went 5-0 up as the semi-final second leg at Upton Park - scheduled for 21 January - was effectively reduced to a non-event.

"They have travelled here tonight and we have not done well, so they are going to give you some stick," said Allardyce.

"We are not the first team to get beaten by so many goals here and we won't be the last.

Spain striker Alvaro Negredo scored his second hat-trick of the season, with Edin Dzeko scoring twice and Yaya Toure once as West Ham were humiliated by Manuel Pellegrini's men.

The Hammers, winless in six matches, face a daunting second leg against City, but before that will look to climb out of the Premier League relegation zone when they visit Cardiff.

Allardyce said: "We fought very hard to get to the semi-final and won some great games and fantastic football matches, but this game fell at the wrong time for us with so many injuries and we have been heavily punished.

"Defence is where I have the most problems. When our defence was together, we had eight clean sheets in our first 11 or 12 games. We have lost James Tomkins, James Collins and Winston Reid. We also haven't had our biggest investment, Andy Carroll, who we thought was going to get the goals for us.

West Ham are winless in their last six matches, losing five of them. They have conceded 22 goals during this run and scored just six.

"If I could have done anything differently tonight, I would have played with Reid, Collins, Carroll and Kevin Nolan, but we didn't have them available."

Manchester City have won 14 of their 15 home games this season, with their only defeat coming in the Champions League against Bayern Munich. They have scored 59 goals at the Etihad and conceded just 13.

Allardyce said: "When they have got such quality as they've got, we cannot get near them. We tried to get near them and they laid the ball off with one touch.

"Their squad is far better than ours. We have not got a full squad. Even if we had, we might have been beaten but I do not think we would have lost 6-0."

He admitted it was "difficult" waking up to "doom and gloom" every morning but added: "We have to accept that is part of the job, to take the bad with the good.

" At the moment, it is not very good. We could've done some things better but when I look at the quality of City tonight, it makes me pretty jealous."