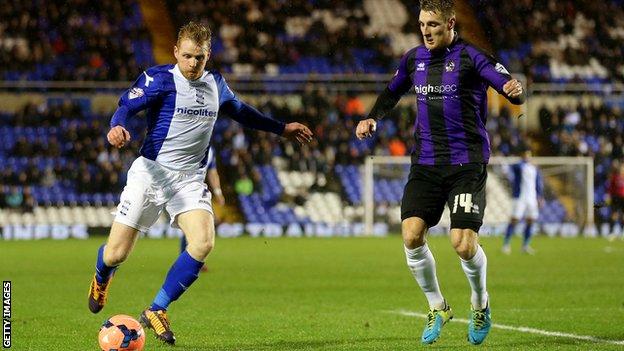 Birmingham City captain Paul Robinson scored his first goal in five years to inspire his side to victory over Bristol Rovers in the third round of the FA Cup.

But it took until the 85th minute for Chris Burke to settle the tie, when he slid home Nikola Zigic's though-ball.

That booked a home fourth-round home tie for Blues against Swansea City, who they have already beaten in this season's Capital One Cup.

The final scoreline was extremely harsh on John Ward's determined League Two side - and the noisy 2,358 horde who had followed them up the M5 from Bristol.

Paul Robinson's last goal was almost five years ago to the day, also on a Tuesday night in the FA Cup, when he scored for West Bromwich Albion in a 2-0 win at Peterborough, on 13 January 2009.

Rovers' best chance came in only the third minute.

But Elliot Richards, put clean through, could only fire weakly straight at goalkeeper Colin Doyle.

Rovers keeper Steve Mildenhall responded by pulling off an amazing triple save at the other end to deny Paul Caddis (twice) and Lee Novak.

Mildenhall could do nothing to stop Robinson putting the Championship side ahead with a far-post header.

But the Rovers keeper pulled off a great save to deny Robinson midway through the second half after the 35-year-old home skipper had made an incredible lung-bursting run from his own box.

"I honestly thought the goalie was going to get the cross but luckily he missed it.

"I just kept my eyes on the ball and concentrated on hitting the back of the net.

"That goal's been a long time coming. But I'm more delighted that we're though to the next round and playing Premier League opposition too.

"The FA Cup matters to the players. The gaffer did not want to change the team. He wants to keep things flowing and keep that consistency ticking over."

"Robbo!!! I've known him for years. He doesn't score goals. I don't know what he was even doing up there. But that was tonight was all about.

"If you make mistakes like we did against a Championship side, you'll get punished for them. 3-0 was a bit harsh but we opened up as we were trying to get back in the game and paid for it.

"You're not going to get a lot chances and the good one that we did have came very early. But I know from playing in that position myself, they're not always easy those one-on-ones.

"Hopefully my young players will have learnt a lot tonight if they want to go to a higher level. And now it's all about taking the good things from tonight into Saturday's game at York. We'll have a good following there too. We get terrific support from our away fans wherever we go."