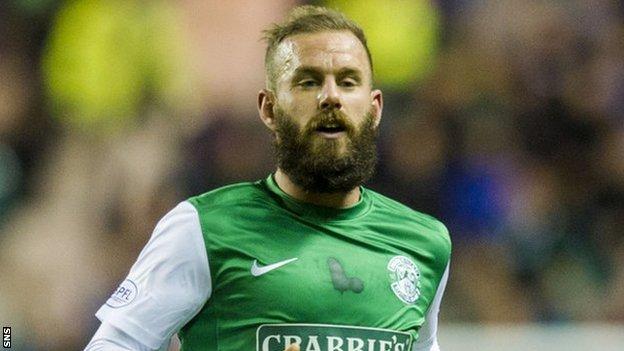 Rowan Vine, Tom Taiwo and Tim Clancy are understood to have been told they can leave Hibernian

Terry Butcher is hoping to begin a restructuring of his squad after taking over as manager in November.

All four players are out of contract in the summer but are free to find other clubs during January.

Vine's last game was on 9 November in a home defeat by Inverness, the week before Butcher switched from Caledonian Thistle and the day after the striker was cited by the Scottish FA for making offensive comments on Twitter towards Celtic manager Neil Lennon that

Fellow Englishman Taiwo, 23, was handed a two-year deal in September 2012 after the midfielder left Carlisle United.

The 29-year-old Thomson, who is in his second spell at Easter Road and, played his last game for the Edinburgh side on 21 December.

He signed a one-year deal in the summer playing for free at the tail end of last season after being released by Middlesbrough.

Butcher refused to confirm any of the players told they can leave the club but did acknowledge that conversations have taken place and that changes are planned.

"My phone was besieged after the initial report came out," said Butcher.

"I certainly have had talks with players and with other managers, coaches and agents about bringing players in as well.

"Those conversations will remain private and I won't say anything until something does happen either way.

"But when you have a squad as big as we have with experienced players who aren't playing then they are not going to be happy and sometimes you have to say, 'look, I can't offer you this or that, it is probably best if you move on'.

"It is very amicable, it is part of football life.

"There is a natural shedding of players when it comes to the January transfer window as well as the summer when the contracts are up.

"I am looking to get new faces in, we certainly want to freshen things up, but it is hard.

"You generally don't do much business until the last two week."