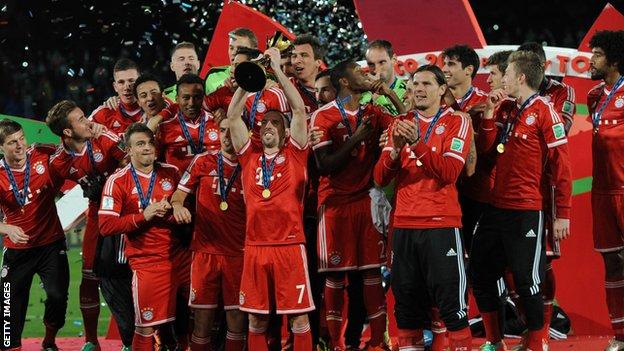 Bayern Munich will offer their fans cheaper tickets for the Champions League trip to Arsenal next month.

"This is intended to represent a small thank you for the great support of the followers in the past calendar year 2013," said Bayern.

Ticket prices charged by Bundesliga clubs are cheaper than those in the Premier League.

Bayern charge home fans between 15 euros (£12) for a standing place and 70 euros (£58) for the most expensive seats at home matches in the Bundesliga, while tickets for the home leg of their Champions League tie against Arsenal on 19 February range from 35 euros (£29) to 100 euros (£82).

The German giants added: "Bayern has thrilled the world of European football not only by the outstanding performance and consistency of its team, but also by the fantastic and vocal support of its fans.

"It's particularly noteworthy that a large number of Bayern fans support the team not only at the high points but also at every away game.

"It should be clear to everyone that this loyalty involves a great deal of time and expense. Bayern have therefore decided to subsidise the tickets for the away game at Arsenal."