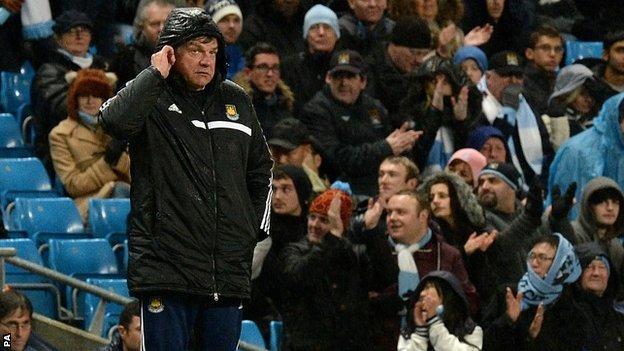 The loss followed a 5-0 FA Cup humbling at Championship side Nottingham Forest.

Joint chairmen David Sullivan and David Gold stood by their manager after the Forest defeat and have not changed their opinion despite losing at City.

Allardyce, 59, has said he will fight on and faces a crucial Premier League relegation game at Cardiff on Saturday.

Second-bottom West Ham are three points behind 17th-place Cardiff in the table and have won just once in their last 10 games - the Capital One Cup quarter-final victory over Tottenham on 18 December.

Large sections of the travelling fans appeared to turn on Allardyce at Etihad Stadium, but BBC Sport has learned that Gold and Sullivan were not swayed in their support of the manager.

Former West Ham defender Julian Dicks said he did not see how Allardyce could continue.

The 45-year-old former left-back told BBC Radio 5 live: "The football isn't good, the lack of passion and pride is awful. I understand where fans are coming from."

He said Hammers fans would have paid "an absolute fortune" to travel to Manchester for Wednesday's game with City and said both the manager and players had to take responsibility for a poor run of form.

"We all have bad games, we all make mistakes, but what you expect from every single game from your team-mates is 100%.

"We all have bad games as a part of football but to watch some of them play is embarrassing.

"The work-rate for the last half dozen games has been disgraceful."

"He should be given the chance to put his best team out on the field of play," said Brown.

"He hasn't had that opportunity this season, that's what the West Ham fans have got to understand.

"If he has his best team, I think West Ham are a top 10 team. If you lost your main striker and three centre halves, I think any Premier League team would struggle."

Jason Roberts, who played under Allardyce at Blackburn, felt criticism of the Hammers boss was "understandable" but, like Brown, felt he was the right man for the job.

"I cannot shake the feeling that in this situation you call for... Big Sam," tweeted the Reading striker.

Allardyce was appointed as West Ham boss in June 2011 and renewed his contract, for another two years, in May 2013.

He led the Hammers to promotion from the Championship in the 2011-12 season and secured a 10th place finish in last season's Premier League.