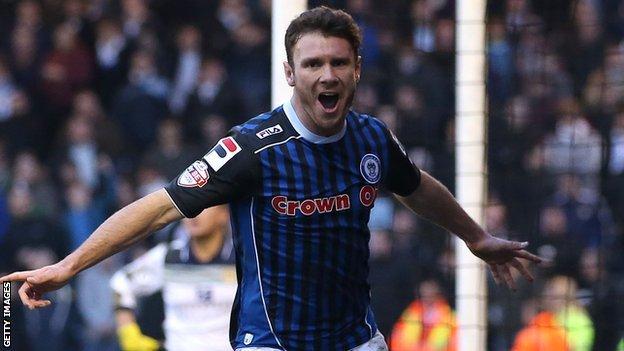 The Posh boss said bids for both forwards have been accepted.

But he expects Lolley to join a Championship side, while Hogan has yet to commit to a move to London Road.

"The problem we've got is with agents, because they're asking for the world," Ferguson told BBC Radio Cambridgeshire.

Hogan, 21, joined League Two Rochdale from Hyde in May and has 12 goals from 26 games this term, including one in last weekend's

After leaving Rochdale in 2011, Hogan had spells with non-league sides Halifax, Stocksbridge, Ashton United, Woodley Sports and Hyde, before returning to Spotland in the summer of 2013.

He was released by Dale three and a half years ago and had a spell in non-league before returning to Spotland.

"We've made a fantastic offer to Scott. But unfortunately his agent is asking for more money than any player that I've had would be on, so that's a problem," said Ferguson.

Lolley, also 21, has seven goals in 23 games in his debut campaign for the Harriers, having been on target 88 times in 83 appearances for previous club Littleton of the Midlands Combination Premier.

Ferguson had a close look at the frontman in Posh's third round against the Harriers last week.

"Lolley's agent point blank refused to let the boy come down to speak to me. I did manage to speak to him after the game," he said.

"Young lads are very impressionable - I can't put too much blame on them. It looks like [Lolley] is going to sign for a Championship club and we may have missed out on that one.

"We'll wait to see what happens with Scott. But it looks like Lolley is done and dusted."

Ferguson hoped Peterborough's track record of taking players from the lower leagues and selling them on to bigger clubs, such as Craig Mackail-Smith, Aaron McLean, George Boyd and Dwight Gayle, would persuade the pair to join Posh.

"No club in the country has got the record we have of taking players from lower leagues and where they've got to," the Scot added.

"I wish more of them were a little stronger to notice what we're doing and not be so greedy."