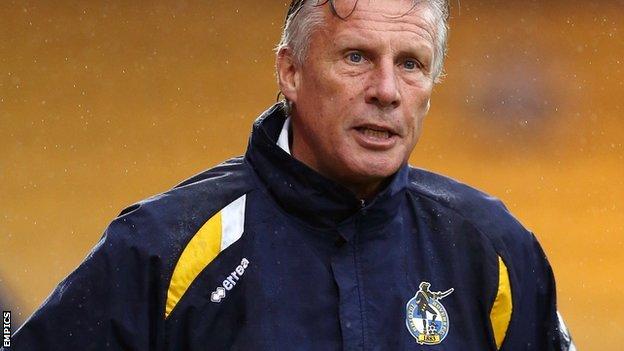 Bristol Rovers boss John Ward has described the FA Cup as a "treat", with the League Two side focused on avoiding relegation.

Rovers earned a third-round tie at Birmingham City on 14 January after settling their second round replay against Crawley at the third attempt.

The Pirates are 22nd in the league and just one point off bottom ahead of Saturday's home game against Exeter.

The replay on 18 December was abandoned midway through the second half because of a waterlogged pitch.

The re-arranged fixture on 4 January was postponed when pitch failed an inspection.

"It's like working with kids sometimes - that's their treat, but we have to win at Exeter on Saturday now."

"We have a big recovery period to try play well on Saturday and win that game. That would mean more to me than any amount of money winning this game and going to Birmingham.

"I'll be happy to get three points at Exeter and I'm saying that, because that, in my football book, is a little more important than this."

Second-half goals from Elliot Richards and John-Joe O'Toole sealed Rovers' progress, more than a month after the initial tie ended 0-0.

On 18 December, the match was abandoned midway through the second half because of a waterlogged pitch, and the fixture was re-arranged for Saturday, 4 January.

However, the match was postponed when Crawley's pitch failed an inspection.

Ward praised his players for coming through another game that was threatened by weather.

"We've had to play those conditions as well as a team that is 30 positions or so above us in the football pyramid," he said.

"It was not a night for fancy football. We were the front-foot team going forward, wanting to win the game, and I'm really pleased with the fitness levels and way the boys have gone about."

The eventual winners of the third-round tie between Birmingham and Bristol Rovers will welcome Premier League side Swansea City, who knocked out Manchester United last weekend, on the weekend of 25-26 January,