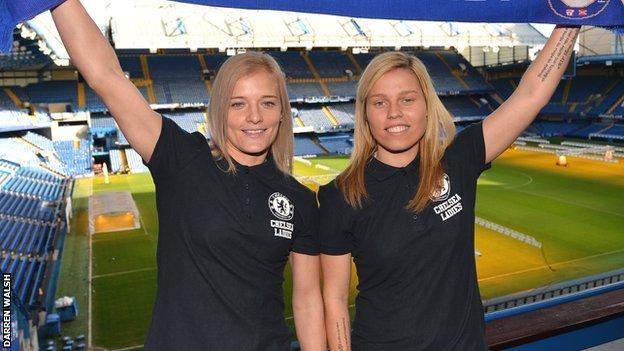 Katie Chapman says she hopes she can return to the England set-up after signing for Chelsea Ladies.

The 31-year-old midfielder has joined 22-year-old defender Gilly Flaherty in moving across London from Arsenal.

Chapman has 82 caps but last played for England in 2010 after childcare issues with the Football Association.

After receiving assurances from new England boss Mark Sampson that the door was open again, she said: "I'd love to represent my country again."

In 2010, then mother-of-two Chapman asked for a short break from international football to spend more time with her family but her central contract was cancelled, which she described as "upsetting".

But after a new change in the FA's childcare policy and Sampson succeeding Hope Powell as England manager, Chapman hopes the move to Chelsea can help her reach 100 international caps.

She has already been for fitness testing with the England squad but, unlike Flaherty, is not in Sampson's training squad which will travel to La Manga in Spain later this month.

"Chelsea have given me a chance to be more professional, to train more or less every day, which can only improve me as a player," Chapman told BBC Sport.

"I took a break from England, and obviously I needed to concentrate on my family at that point, but now I have an opportunity to come back and be part of the England team which is fantastic for me, but Chelsea is my first thought.

"The new manager has taken over and asked if I was interested in coming back to play and I was."

The now mother of three does not believe there would be any childcare issues but said: "I will have to have a discussion with Mark and the FA but hopefully we can resolve all of that and move forward. The main thing is to play for England."

Chapman, who has spent seven years at Arsenal over two spells, is one of the most decorated players in the English game having won the Uefa Cup, six league titles and eight FA Cups.

But she is not worried about moving to Chelsea, who finished second from bottom of the FA Women's Super League last season.

"Chelsea are a club that is building," Chapman added. "Hopefully I can help bring the club forward and prove myself as player and hopefully we can do better next season."

Chelsea Ladies manager Emma Hayes, who worked with both Chapman and Flaherty during her time as Arsenal Ladies assistant manager, said: "Gilly is the best uncapped player in the country. She will become a bedrock for club and country as she has all the hallmarks of a top class player.

"Katie is best at what she does in this country and I am sure any manager would say the same. Her experience and winning mentality is what sets her apart and she is a fabulous role model too."

Flaherty added: "It was a really tough decision to leave Arsenal but getting the chance to work with Emma again plus the vision here at Chelsea was just too good to turn down."