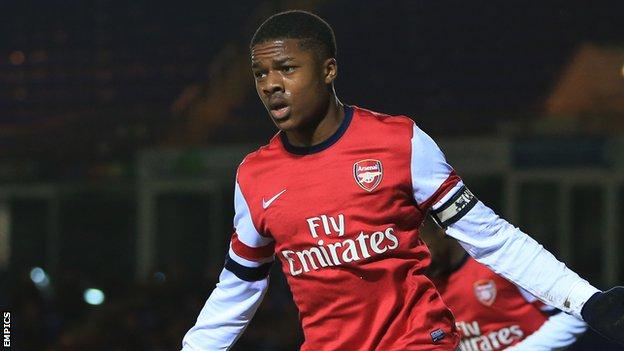 The 18-year-old has been on the books with the Premier League club since the age of six and made his first-team debut earlier this season.

"He is a strong, quick player with an excellent touch and good vision," Brentford boss Mark Warburton told the club website.

"I am sure he will make a valuable contribution to the squad."

Akpom, who featured for Arsenal's Under-18 side when he was just 15, has made two senior appearances for the Gunners.

He has previously represented England at Under-16 and Under-17 level and has scored six goals in 11 outings for England Under-19s.

"I am delighted to welcome Chuba to the club for what will be his first loan spell away from his home club," Warburton added.

"I have enjoyed watching Chuba's development over the last two seasons and particularly noticed his contribution for Arsenal in the NextGen Series tournament.

"I would very much like to thank Arsenal for their most professional and prompt response to our request to take Chuba."