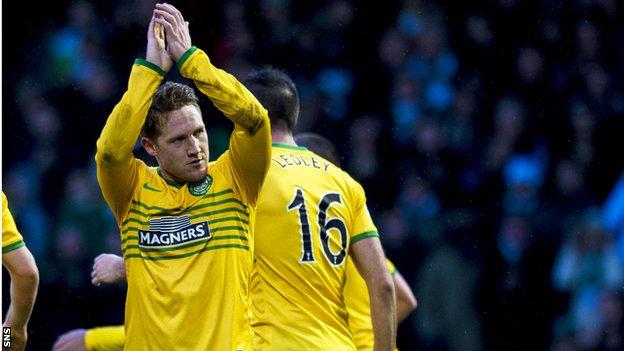 Memo to the engraver of Scottish football's player of the season awards: it's Kris with a K.

is surely a shoo-in for a clean sweep of the big prizes as long as he steers clear of a serious injury.

I know we're just past the halfway stage in the Premiership campaign, but I can't see there being a serious rival to the 30-year-old for individual honours.

That's not to downplay the quality of display we've seen from others. And, in fact, the closest thing to a challenge could come from

I don't imagine cigar-smoking's Van Dijk's thing, but it would be a natural accompaniment to the 22-year-old Dutchman's style of defending.

He's rarely ruffled and has brought much-needed calmness and control to the middle of the Celtic backline.

St Johnstone striker Stevie May's a year younger and, in his first half-season as a regular pick in top-flight football,

However, his tally is two goals behind another natural-born goalscorer: Inverness striker Billy McKay,

Both face a major challenge to get anywhere remotely close to the career goals total of Kris Boyd and the born-again Kilmarnock striker is back doing what he does best.

Boyd's surrounded by young talent at Rugby Park and that's a general theme that, much to our continuing enjoyment, runs through the whole Scottish game.

Nowhere has the emergence of exciting youngsters been more obvious than at Dundee United.

The progress of teenagers Ryan Gauld and Andy Robertson has been breathtaking and, a couple of rungs further up the ladder, Stuart Armstrong has broken into the Scotland squad.

Aberdeen's Ryan Jack is another who's been promoted from the under-21 squad on the back of top performances. Team-mate Peter Pawlett might not be far behind.

It's only when you embark on a list like this that you realise how many positives there have been this season despite the lack of competition for top and bottom spots in the Premiership.

And there's been nothing more positive over the last five months than the top-drawer performances of Commons.

As Celtic bowed out of the domestic action for a mid-season break, Commons stamped his class all over St Mirren Park in the course of a 4-0 win.

I said during the BBC Radio Scotland commentary that, every time the ball landed at Commons's feet, there was an expectation that something significant was about to happen. We weren't disappointed.

His touch was sublime; instant control. His movement was intelligent, always finding pockets of space. The quality and range of his passing ripped St Mirren apart.

And his finishing was clinical.

One goal scored with his head, one lashed in with his left foot. Commons's 16th and 17th goals of the season - not bad for someone who doesn't play up front - and his Celtic total in three years at the club has gone past the 50 mark.

The £300,000 or so paid to Derby County in January 2011 goes down as a spectacularly smart investment.

And maybe we've yet to see the best of Commons. He won't lose his pace - running away from defenders has never been his game.

But give him the ball in the final third and you can almost guarantee he'll have an impact. A whipped-in cross, a measured pass, or a rocket shot into the top corner. Take your pick.

A Scotland comeback would be nice. I'm sure Kris had the best of reasons for giving up the international scene and maybe nothing's happened to change his mind.

At least we can still appreciate his talents in the club game. For me, as a football nut, he's a joy to watch. I think, whatever your persuasion, you would have to agree Commons is a top player.

He underlined it in that St Mirren game prior to Celtic taking off for Turkey. Different gravy.

And surely a standout candidate for player of the season.