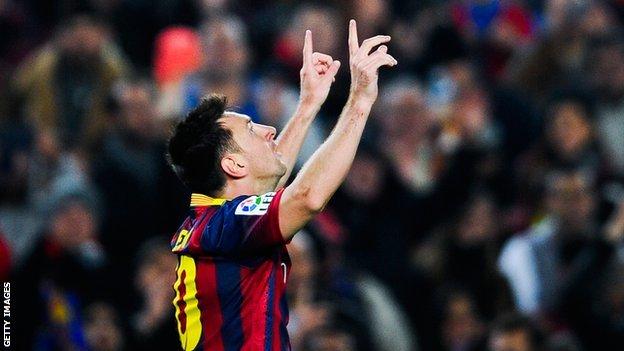 Barcelona forward Lionel Messi says he wants to spend the rest of his career at the Spanish club.

The Argentina captain scored twice on his return from a two-month injury lay-off on Wednesday as Barcelona beat Getafe 4-0 in the Copa del Rey.

"I want to retire here. While people want me, I want to spend my whole career at FC Barcelona," said Messi.

There had been doubts over his future at Barca after a row with club director Javier Faus about a new contract.

It had been reported that Faus insisted they had no obligation to review Messi's contract, which was extended in February to June 2018.

Messi has scored 16 goals in 17 games for Barcelona so far this season, in games including the league, Champions League, Copa del Rey and Super Cup.

Messi, 26, then accused financial vice-president Faus in December of knowing nothing about football.

The four-time world player of the year was troubled by injuries in 2013 and the latest of those came when he limped out of a 4-1 win at Real Betis two months ago with a hamstring strain.

He was initially treated in Barcelona but was then allowed to return to Argentina before Christmas to continue his rehabilitation.

He told the club television channel El Marcador: "My excitement to play is always there but it is true that these past two months have been difficult.

"I'm here to add to the team, to help the team achieve its goals. Very difficult months are ahead but we will fight like we always have at this club."