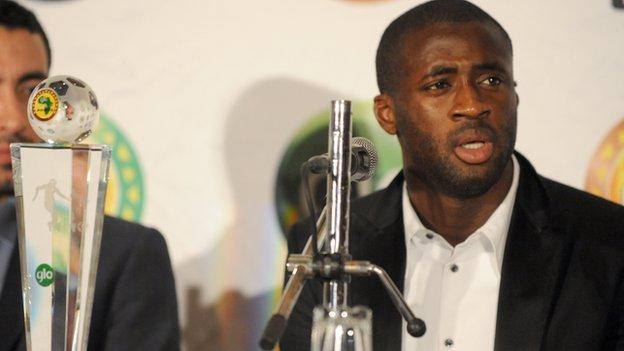 Manchester City and Ivory Coast midfielder Yaya Toure has been named the Confederation of African Football (Caf) Footballer of the Year.

It is a third straight title for Toure, who also won December's BBC African Footballer of the Year award.

He was up against fellow Ivorian Didier Drogba, of Galatasaray, and Nigeria and Chelsea midfielder John Mikel Obi.

"What I am doing now, I am doing very well and I am very happy about that," Toure said after receiving his award.

But he acknowledged that it had been a difficult choice for the national team coaches and technical directors who take part in the vote.

""It was quite tight - because it there were good opponents in front of me. Obi Mikel was doing well - and Drogba as well, so I was thinking maybe I would lose it. I am lucky today, I am very proud of myself," he said.

Toure, 30, emulates Abedi Pele and Samuel Eto'o with a hat-trick of wins.

Toure may not have won a major trophy for club and country last year but his class has shone through at both domestic level and for the Elephants of Ivory Coast.

He was honoured at a ceremony in Lagos, Nigeria, on Thursday.

Toure's form also led to him being the only African to be included on the 23-man shortlist for Fifa's World Player of the Year.

His closest rival for the Caf award was Mikel, 26, who helped Nigeria win the 2013 Africa Cup of Nations in South Africa and also featured in Chelsea's Europa League win.

Former Arsenal striker Nwankwo Kanu was the last Nigerian star to win the prestigious award in 1999.

Nigerians were disappointed that Mikel missed out - but elsewhere the country had an excellent night.

The man who led the Super Eagles to the 2013 Africa Cup of Nations crown, Stephen Keshi, was named coach of the year - and his team got national team of the year for that triumph in South Africa.

And Kelechi Iheanacho, who starred for Nigeria's U17 team when they won the World Cup in United Arab Emirates, scoring 6 goals, won the most promising talent award.

His team won youth team of the year.

Egyptian great Mohamed Aboutrika was the African-based player of the year for an unprecedented fourth time - taking the crown just weeks after calling time on his illustrious career.

His club, the Cairo giants Al Ahly, were named club of the year after they won their eighth African Champions League title, despite having precious little domestic football in Egypt for the last two years.

Aboutrika said: "It is great to conclude your career with such an honour. I personally cherish this as it comes in what have been very difficult circumstances for Al Ahly and Egyptian football in general for long time now.

"This is the last honour I will get as a player and I hope that in the following career that I will choose that I will also be distinct and to be useful for my country and Al Ahly."