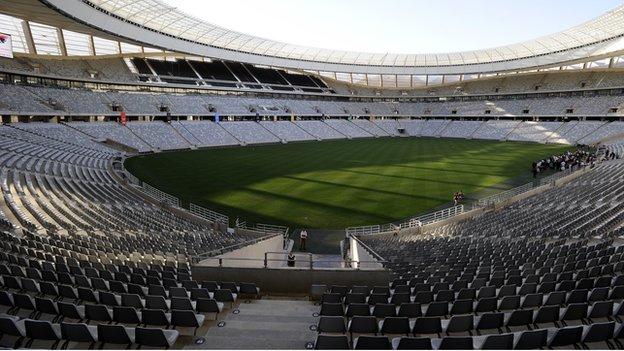 Being awarded hosting rights for the third edition of the African Nations Championship (CHAN) was always going to be a poor consolation prize for the cities that bid unsuccessfully to host games during last year's Africa Cup of Nations in South Africa.

Selling tickets for a tournament bereft of high profile overseas based stars, and even those playing on the African continent but outside their home countries, was always going to be a tough ask for the three host cities, Cape Town, Bloemfontein and Polokwane.

With only three days to go before the start of the tournament a mere 10,000 tickets had been issued (including a significant number for dignitaries and officials) for Saturday's opening games at the impressive 54 000-seat Cape Town Stadium (pictured) when host nation South Africa meet Mozambique followed by the west African derby between Mali and tournament debutants Nigeria.

Despite generous discounts being offered to those buying their tickets early, sales have also been going slowly in Bloemfontein and Polokwane.

The best hope of attracting crowds would have to be stirring the sizeable expatriate communities particularly those from the Democratic Republic of Congo, Nigeria, Zimbabwe and Ethiopia to come out and support their teams.

It hasn't helped that the host nation has had a fractious build-up to the tournament, marred by uncertainty over the availability of players from top clubs like league champions Kaizer Chiefs, Mamelodi Sundowns and big spending BidVest Wits University.

Players from Orlando Pirates were already not considered due to them having to catch up on their backlog of fixtures following last year's eight-month Champions League campaign that took them all the way to November's final.

Interest in the tournament will be further diluted by the scheduling of local Premier League fixtures during the course of the tournament, including a few high-profile encounters.

Pirates meet SuperSport United in a crunch game one week after the start of the tournament and Chiefs and Sundowns play in a crucial top of the table clash five days later which will see their respective players returning to their clubs for that game.

Still, the three-week tournament, which sees countries from all regions of the continent being represented, will offer the 16 coaches a few vital pointers ahead of their forthcoming campaigns.

It will also offer many the chance of improving their Fifa rankings (the tournament carries friendly match status) ahead of April's draw for the qualifiers for the 2015 Nations Cup.

For World Cup-bound Nigeria and Ghana, coaches Stephen Keshi and Maxwell Konadu, will have a great chance to assess the claims of locally based players just a few months ahead of the Fifa showpiece in Brazil.

Keshi for one, hasn't been shy to select home-based players and this should provide great motivation for several members of his team to stake their World Cup claims.

Ethiopia, Congo Brazzaville and the inaugural champions DRC all have strong home-based contingents.

The Walya Antelopes bring 11 of the 23-man squad that won the hearts of many at last year's Nations Cup while the two Congos feature a healthy complement of players from champion clubs AC Leopards and TP Mazembe, who featured strongly in the Champions League and Confederation Cup respectively last year.

Besides the incentive of winning the tournament, representing their respective countries should also offer the locally based players an opportunity of showcasing their talents to the many scouts who are bound to be following the action in search of the new generation of African stars.