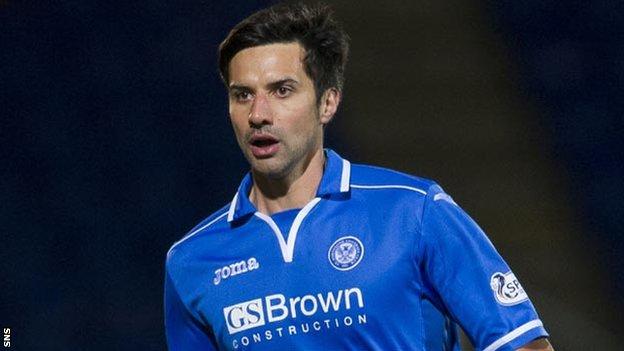 Rory Fallon could be next to leave St Johnstone after the New Zealand striker was told he can find a new club.

Saints manager Tommy Wright said: "We have spoken to Rory Fallon and he is now available to other clubs.

"But we are still looking to bring other people in. However, we need to get people out before we can do that."

The chairman is very supportive, but we have had to cut our budget by quite a huge amount

Fallon, 31, joined St Johnstone in July after leaving Scottish Premiership rivals Aberdeen but 11 of his 12 appearances have come from the substitutes' bench, and he has scored only once.

Michael O'Halloran arrived on an 18-month contract last week after leaving Bolton Wanderers, and Wright says a new striker is his "main target".

"I enjoy the challenge of trying to get players in," he said. "We don't have the biggest budget in the league because this club is run properly.

"We can't spend what we can't afford, so I have to work as hard as I can to get loan deals or ask Premier League clubs down south to do us a favour.

"The chairman is very supportive, but we have had to cut our budget by quite a huge amount."

Wright reluctantly released 32-year-old Bosnian Jahic to assist his chase for a striker, with Steven MacLean sidelined until the end of February with a knee injury.

"In an ideal world, I would have kept hold of Sanny because he is an extremely good player and great to work with," he said.

"But finances dictated I could not do that. If I had kept hold of Sanny, it would have made it even more difficult to find the money for a striker.

"Michael O'Halloran has come in, but he is more suited to play from the side, but we really need someone else to come in and chip in with a few goals."

"The other players are also doing extremely well and we're now working through the rest of the squad to get them tied up," he added.