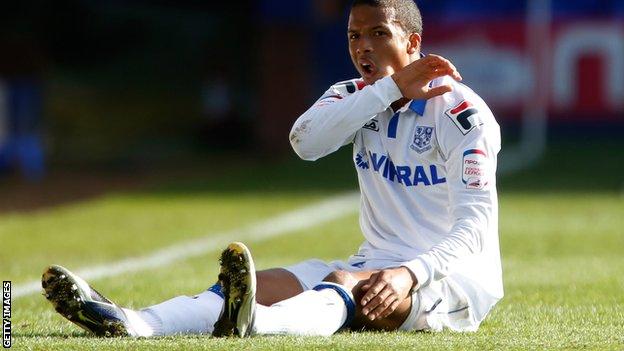 Tranmere midfielder Joe Thompson is feeling "all right" having completed three of his 12 chemotherapy sessions after being diagnosed with cancer.

The 24-year-old has nodular sclerosing Hodgkin lymphoma and is undergoing a six-month course of chemotherapy.

"I am quite comfortable talking about it, I can't change the fact that I have it," he told BBC Radio Merseyside.

Thompson, who was diagnosed in November, recalled the first time he felt unwell was before a game in August.

What is nodular sclerosing?

"Nodular sclerosing is the most common of all types of Hodgkin lymphoma in the UK. Nearly six out of 10 of all diagnosed cases are this type and it is the most common type in young adults. It is usually found at an early stage when lymph glands in the neck become enlarged."

"I was quite ill before the Crewe game but I managed to get out on the field," he explained.

"Slowly, I started to deteriorate and was coming into training with hardly any energy and then the lump came up.

"I feel half the battle is in your mind. If you walk around with a grey cloud over your head, it's going to rain on you so you need to stay positive."

The Rochdale-born player began his career at his hometown club where he made over 100 appearances before signing for Rovers in 2012.

He has made eight appearances this season, and says he misses playing for Ronnie Moore's side.

"It puts everything into perspective but football is a massive part of my life," he added.

"Without my health, I can't do football so at this moment in time, football is secondary.

"The turn of the year was significant for me because there was a lot of games and I realised how much I was missing it."