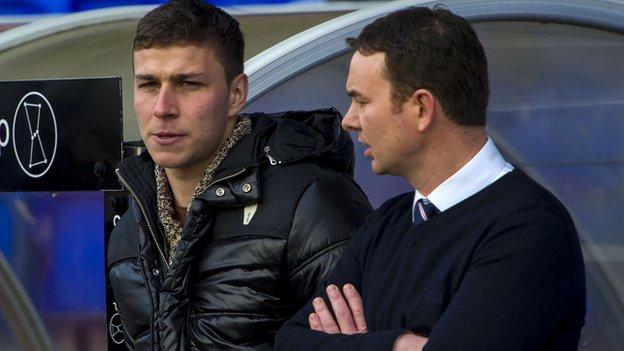 Filip Kiss believes he has started a love affair with Ross County that will breathe new life into his relationship with parent club Cardiff City.

The 23-year-old has until the end of the season after falling out of favour with former boss Malky Mackay.

"I must say that the club has impressed me a lot since I came," he said.

"I think I can add something here and come back a better player and fight for a place in a club like Cardiff."

I must say that the club has impressed me a lot since I came, especially the manager and George Adams

Kiss has not featured at all this season and made only three appearances last term as Cardiff won promotion to England's top flight.

Now the Slovakian midfielder is poised to make his debut for County against Partick Thistle after the move was delayed while Cardiff lured Ole Gunnar Solskjaer from Molde as Mackay's replacement.

"I was very disappointed because I wanted this move and to start playing as soon as possible," Kiss told BBC Scotland.

"When I saw the manager being sacked, I knew I was going to have to wait for a new manager, but it finally happened and I don't want to think of that again, just look forward.

"The club has changed a lot since I joined them two years ago and I was keen to leave and get a new environment round me."

Kiss has been impressed by the Highland club and praised the team, manager Derek Adams and director of football George Adams after watching to improve their chances of avoiding relegation.

"It is good timing to join Ross County," said Kiss. "At this time, they are doing well and I am very much looking forward to playing.

"Hopefully I can help them and Ross County can help me get back playing again.

"I think there are some very good players in the team and they maybe just needed some confidence and I think they've got it.

"Since I have arrived, they have played very well and I hope I can add to the team as well.

"It is a big change, but I just want to play the highest football I can and Dingwall is a nice area, something different from Cardiff, but it is very similar to some areas of Slovakia.

"I must say that the club has impressed me a lot since I came."

Kiss joined Cardiff from Slovan Bratislava in July 2012, made 33 appearances in his first season in Wales and, although more than half of those were from the substitutes' bench, manager Adams thinks he has proven his quality.

"Filip's come in and he's a player who has done very well for Cardiff a couple of seasons ago and he's a strong central midfielder," he said.

"He can either sit in midfield or he can go forward and provide attacks for us."

In addition, Adams has and midfielder Michael Tidser on loan from Blackburn Rovers and Rotherham United respectively, while from a spell back in his Greek homeland with Veroia.

"We are trying to add another couple of players before the transfer window is out," he added.

"Jordan did very well in the game against Inverness and a couple of days later played against St Johnstone, so he'll be fresh and raring to go against Partick.

"Ikonomou's come in and it is as if he's never been away. He's a relaxed character and he's been very good for us in his first game.

"We've got Michael Tidser, who came on last Saturday as well, so it bodes well for the future."