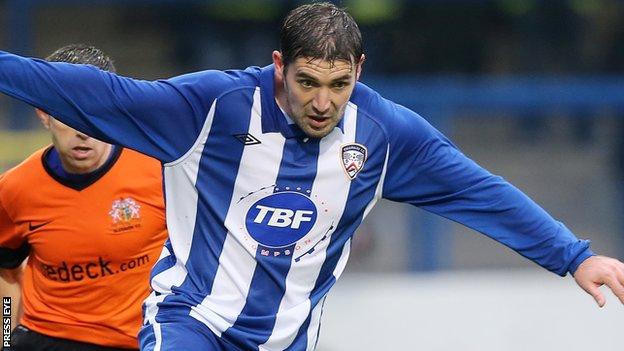 Former Northern Ireland winger Stephen Carson will play his last match for Coleraine on Saturday before taking up a coaching role in the United States.

Carson will end his second spell with the Bannsiders in the Irish Cup fifth round tie away to Cliftonville.

The Ballymoney man has landed a job in Connecticut with Everton America.

"I am excited about the new challenge, but it is sad to be bringing the curtain down on my Coleraine career," said the 33-year-old.

"I love the club and I really cannot thank everyone enough for everything they have done for me during my seven-and-a-half years at the Showgrounds.

If he plays at Solitude on Saturday, it will be Carson's 300th appearance in a Coleraine shirt.

Carson returned to the Showgrounds in July 2013 after two years with Belfast club Glentoran.

"I am grateful to manager Oran Kearney and chairman Colin McKendry for making it possible for me to come back," Carson told the Coleraine club's website.

"I enjoyed my time at the Glens, but I wanted to go back to Coleraine. I would have liked to be able to sign off with us in a healthier league position, but it just has not worked out."