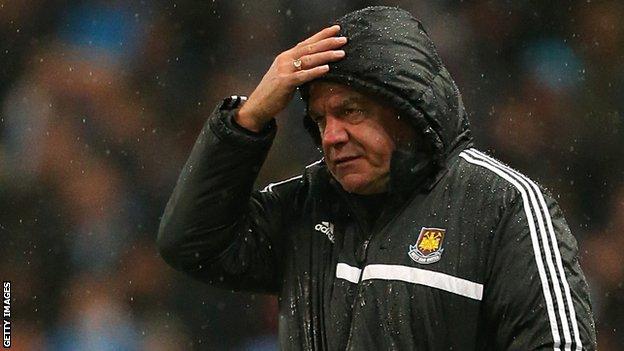 West Ham manager Sam Allardyce wants his players to use their "anger" as motivation to help halt their decline.

Allardyce, 59, retains the backing of the club's owners after the 6-0 Capital One Cup semi-final first-leg defeat at Manchester City, which followed a 5-0 FA Cup loss at Nottingham Forest.

In an email to supporters, Allardyce promised a reaction from his players.

"We've got to get out there, face the music and use it to anger us, make us mad, and win matches," he said.

"The players can't feel sorry for themselves. We are professionals and we've got to take the criticism thrown at us because that's what happens in the game at this level.

"We've got to be man enough to take it on the chin and be determined enough to show people that what they think at this particular moment in time is wrong.

Joint-chairmen David Sullivan and David Gold stood by the manager after Sunday's defeat at Forest and have not changed their opinion despite losing at the Etihad Stadium.

Second-bottom West Ham are three points behind 17th-place Cardiff in the table and have won just once in their past 10 games - the League Cup quarter-final victory over Tottenham on 18 December.

Large sections of the travelling fans appeared to turn on Allardyce during Wednesday's game, but BBC Sport has learned Gold and Sullivan were not swayed in their support of the manager.

Former West Ham defender Julian Dicks said he could not see how Allardyce could continue.

The 45-year-old former left-back told BBC Radio 5 live: "The football isn't good, the lack of passion and pride is awful. I understand where fans are coming from."

He said Hammers supporters would have paid "an absolute fortune" to travel to Manchester and insisted both the manager and players had to take responsibility for a poor run of form.

"We all have bad games, we all make mistakes, but what you expect every single game from your team-mates is 100%.

"To watch some of them play is embarrassing. The work-rate for the last half-dozen games has been disgraceful."

Former West Ham striker Frank McAvennie, who had two spells at Upton Park totalling five years between 1985 and 1992, believes his former side are lacking spirit.

He told BBC Radio 5 live: "Sam says we're looking forward to the weekend but any team that concedes 11 goals in two games, their confidence is shot.

"If they had fight, it doesn't matter what way they go about winning games but I don't see any fight there and Sam's teams have always had that."

Southend manager Phil Brown feels Allardyce, whom he worked under at Bolton, needs time to turn things around.

"He should be given the chance to put his best team out on the field of play," said Brown.

"If he has his best team, I think West Ham are a top-10 team. If you lost your main striker and three-centre halves, I think any Premier League team would struggle."

Allardyce was appointed as West Ham boss in June 2011 and renewed his contract, for another two years, in May 2013.

He led the Hammers to promotion from the Championship in the 2011-12 season and secured a 10th-place finish in the Premier League last season.