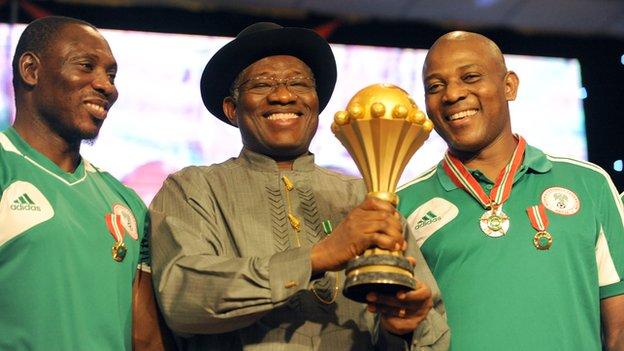 Nigeria assistant coach Daniel Amokachi says there is a togetherness in the squad that makes them "dark horses" for success at the World Cup in Brazil.

"That ego that has always been in the team has been eradicated," Amokachi told the BBC World Service.

"Everybody has love for one another and that's showing on the pitch. The unity in the team has been the key to our success in the last year.

"We're going to the World Cup to get something out of it."

Amokachi is confident the 2013 Africa Cup of Nations champions, who will face Argentina, Bosnia-Hercegovina and Iran and in Group F, can go further than any Super Eagles squad has been before in the tournament.

Nigeria have made it out of the group stage only twice in their four appearances at the finals - losing in the next round on both occasions - and Amokachi has urged the team to be more ambitious.

"As far as you are a coach or a team you go to a tournament to win it," added the former striker, who won 44 caps for Nigeria and spent two years at English club Everton.

"Nigeria are one of the underdogs but probably we'll be one of the dark horses along with the likes of Colombia and Belgium.

"Coach Stephen Keshi has the same ambition as myself and we think alike - you don't set a target saying I want to get to the second round or the quarter-final or the semi-final, we go there to work hard and in football anything can happen.

"We could meet a team like Brazil and they have a bad day and we end up beating them.

"We're going to take it a game at a time but we'll look forward to spending the whole month in Brazil."

Some of Nigeria's key squad members like Emmanuel Emenike and Victor Moses missed the Confederations Cup in Brazil last year because of injury and Amokachi is hoping they'll have a fully fit squad for the tournament which runs from 12 June to 13 July.

"Emenike is a striker that can't stop scoring goals right now but it's not just about Emenike, it's about the team," he said.

"We want all the key players to be out there, not just the Nigerians.

"We want the World Cup to be exciting - we don't want a tournament without Lionel Messi, Wayne Rooney or Cristiano Ronaldo. We pray that they keep fit."

Nigeria's first match of the tournament will be against Iran in Curitiba on 16 June.

Amokachi believes they are in a tough group and insists they won't be underestimating any of their opponents.

"When the draw came out a lot of Nigerians were really excited thinking it would be an easy ride. Definitely not," he said.

"Argentina are on fire. Bosnia are one country in Europe that had probably an easy ride in qualification but with the firepower they have in attack you can never rule them out.

"Iran is a country that have shown they can play football and for them to qualify for the World Cup, you can't take them lightly.

"Any country that is in the World Cup we should respect the way they play and just stick to our own task and business and get the job done.

"We know the spirit that we have in the team right now and everyone's looking forward to it."