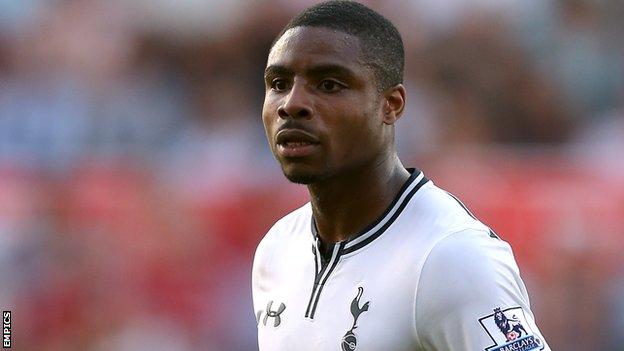 Jonathan Obika is aiming to impress at Brighton after joining the Championship club on a three-month loan deal.

The 23-year-old striker is starting his tenth loan spell away from Tottenham.

"There are a lot of factors when you go to different clubs. My last loan spell was at Charlton and I did very well there," he told BBC Sussex.

"Whenever I think about the future I always think you have to get the present right. I'll make sure I do well here and we'll see what happens."

"If you can get Jonathan right and firing, he is a good signing.

"He is somebody to come in that Nathan Jones knows and will bring cover.

"When you join a club and know somebody like the assistant or the manager, it gives you more stability.

"It is another chance to prove himself and might be the opportunity to look for something longer.

"I don't think he'll be coming in and starting that many games. He is not necessarily someone to come in and replace other players."

Obika made his debut for Spurs in November 2008 but has only made four appearances for the Premier League club.

He has had four separate loan spells at Yeovil and has also spent time at Millwall, Crystal Palace, Peterborough United, Swindon Town and Charlton Athletic.

The former England Under-20 international scored three goals in 10 appearances for the Addicks last season.

"Going from Spurs, my first loan spell was at Yeovil which was a culture shock," Obika said.

"Loan spells makes you mature quicker and you develop and grow as a person and a player.

"Nathan [Jones, Albion assistant coach] was there when I had my first spell at Yeovil. He has been a big part of my career so far; in my confidence and I really enjoy the work he does on the field.

"Everywhere you go is an experience and I am here to hit the ground running. The aim for me is to help the team in pushing on."

Obika was sidelined by an ankle injury last year but scored six goals in an Under-21 match between Spurs and Charlton earlier this week.

"I've been back for three and a half weeks now and played two games," he said. "I've been firing and I'm happy I'm back playing again.

"It's been an explosive start to the New Year. I'm just looking forward to pulling on the shirt."