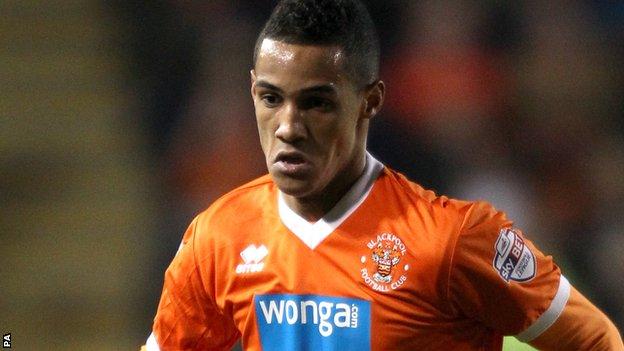 Michael Laudrup has refused to be drawn on whether Swansea City are trying to sign Blackpool winger Tom Ince.

Swansea were reported to be in talks to sign the England Under-21 international, son of Blackpool manager Paul Ince.

Laudrup said: "I think there is a lot of talk and rumours and speculation so let's leave it there."

Blackpool boss Ince senior admits there has been interest from the Swans but insists there have been no formal offers.

Ince was set to join Swansea's south Wales rivals Cardiff City in the summer but turned down the move after becoming a father.

The former Liverpool player, who has also been linked with a move to French Ligue 1 side Monaco, was offered a new deal in December to stay with the Championship team.

There had been reports a Swansea deal for Ince was close but Blackpool chairman Karl Oyston denied there had been any talks between the two clubs.

Although cagey on the subject of Ince's future, Swansea manager Laudrup was full of praise for the Stockport-born player.

"He is a talent, he has played for England Under-21s," Laudrup added.

"One thing is to play in the Championship and another thing in the Premier League.

"But I think he's a very good talent for the future for whoever picks him up or signs him."

Swansea make a swift return to Old Trafford on Saturday to face a Manchester United side they beat 2-1 in the FA Cup third round last Sunday.

"Can we win again? I don't know, but it is possible," Laudrup said.

"I think it will be more difficult than last week. They lost in the League Cup as well and I expect the United team to come out and really go at us.

"They have to win this game so we have to be ready. It will be a tough game again. They won't like what they hear about losing three in a row.

"But If they win a game, they are back. Football can change in a matter of weeks.

"We have shown that it is possible to win there if you believe in it. We played with a lot of confidence, but needed a win.

"Sometimes that win comes when you least expect it. You wouldn't maybe expect to win at Old Trafford and we did."