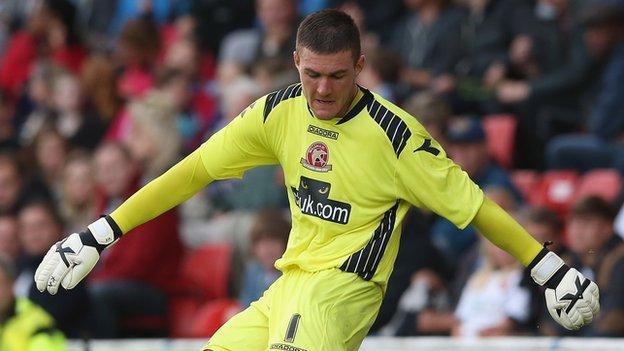 Walsall goalkeeper Richard O'Donnell has signed a new contract tying him to Bescot until June 2015.

The 25-year-old former Sheffield Wednesday and Chesterfield man signed on a one-year deal in the summer, having initially arrived on trial.

But he has since proved a reliable ever-present, having kept eight clean sheets in 24 League One matches.

"This is something that I have worked towards since the day I first arrived here," said O'Donnell.

"I am really pleased that this has been sorted and now I can concentrate on my football and our push for the play-offs."

O'Donnell is looking to earn promotion to the second tier of English football for the second time, having made six appearances for Wednesday in the team that went up from League One to the Championship in 2012.

Walsall's reliance on O'Donnell between the sticks is in direct contrast to last season when Walsall used five different keepers.

"Richard fully deserves this extension," said Saddlers manager Dean Smith. "He has steadily improved and developed since he has been here.

"He is a hard-working and dedicated lad who has really benefitted from the work he has done with our goalkeeping coach Neil Cutler.

"This is another important piece of the jigsaw for us as we plan ahead. He's a good age and fits our criteria in that he has a real willingness to learn and further develop."