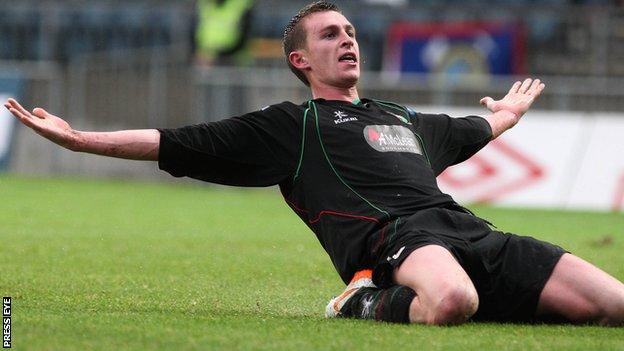 Glentoran defender Jay Magee is suspended as the Irish Cup holders prepare to take on Portadown in Saturday's opener at Shamrock Park.

Magee grabbed a dramatic injury-time equaliser in the league clash between the sides at the Oval last weekend.

Intermediate League minnows Strabane Athletic are aiming for a fifth round upset against Ballinamallard United.

"Getting to this stage was our goal - we'll enjoy it and give out our best shot," said manager Marty Doherty.

The ambitious County Tyrone club has come a long way in recent years and aims to move up to Championship level.

There's full coverage of local football's biggest day of the season on Saturday Sportsound, presented by Michael McNamee on Radio Ulster from 14:00 GMT.

We'll have updates from the other 15 fifth-round games with the minnows aiming to take a big scalp.

Pat and Alfie Stewart, who have played for both the Glens and Ports, will make the sixth-round draw live at 17:30.

It is buzzing ahead of the trip to Ferney Park and there's added spice with former Mallards players Gerald Boyle, Gerard Donaghey and Warner Mullen in the Strabane team.

"It's got a derby feel to it. Over the years you could put two teams together from Strabane to have played for Ballinamallard, including myself," added Doherty.

"They play against top opposition each week in the Premiership, although we've got players who have come from a higher standard and they see a big project with us.

"Three years ago we were playing on a boggy pitch in the Fermanagh and Western League Division Three, and now we're going to Ballinamallard in the Irish Cup - it's unheard of really but it's brilliant.

"Ballinamallard are red-hot favourites to go through, but they are the team with everything to lose."

Premiership champions Cliftonville host Coleraine and it will be an emotional occasion for Bannsiders winger Stephen Carson.

Carson will play his final game for the club before taking up a coaching position in the United States with Everton America.

League leaders Linfield take on Dergview at Windsor Park and Blues boss David Jeffrey has received a boost before the game after being named the NI Football Writers' Manager of the Month for December.

"I've won 32 of these award and I never tire of them," said Jeffrey.

"Whilst it's an individual award, it's the team that wins this trophy, so I have to give credit to the players and my staff. It's a privilege to collect this award on their behalf."

Ards, who have signed former player Sean Cleary on loan from Crusaders until the end of the season, make the visit to Armagh City.

Ballymena's new signings Jim Ervin and Darren Boyce are set to make their Sky Blues debut against a H&W Welders side missing the banned Stephen Cockcroft.

There could also be a debut for Glenavon midfielder Brian McCaul, following his move from Linfield, with the Lurgan Blues entertaining Sport & Leisure Swifts.

Crusaders boss Stephen Baxters plans to bring in a number of fringe players for the Seaview encounter against Amateur League outfit Crumlin Star.