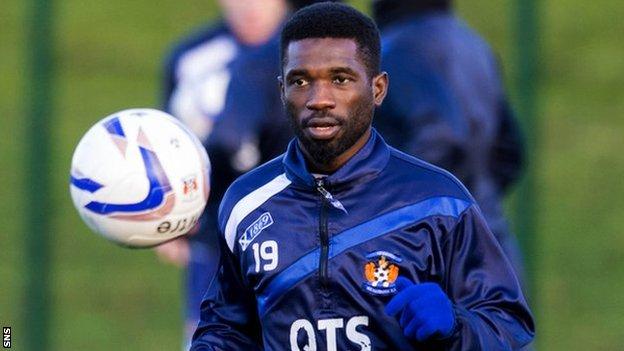 "Gabriel requested that he be released from the remainder of his contract to enable him to seek a new challenge elsewhere," said a statement.

"Rabiu left the club by mutual agreement in search of regular first-team football."

The 22-year-old Ibrahim had joined from Celtic and the Nigeria Under-23 international went on to make 17 appearances.

He has not played for the first team since despite having been given the all clear to play again following the health scare.

Reuben, 23, who had previously been with Kano Pillars in his homeland, did not make the first of only three appearances for the Scottish Premiership side until November.

Reuben, capped 10 times for Nigeria, has not featured since being sent off in a

He had joined but his former Kano Pillars and Nigeria team-mate was released in June after failing to win a first-team outing under previous Kilmarnock manager Kenny Shiels.

Reuben has already as he looks to retain his place in the Nigeria squad for the forthcoming World Cup finals.

"Everyone at Kilmarnock Football Club thanks Gabriel and Rabiu for their respective contributions and wishes them every success in the future," added Kilmarnock's statement.

"Both players have expressed their thanks to the club's staff and supporters for the warm welcome which they received and wish the club the best of luck in 2014 and beyond."