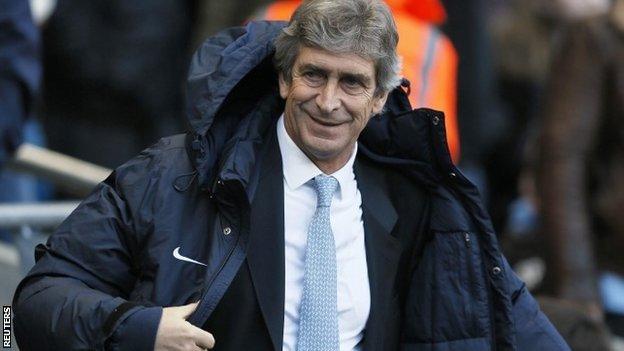 Pellegrini's side, who are currently one point behind leaders Arsenal, were unbeaten during the month, picking up six wins and a draw to earn the 60-year-old the award for the first time.

Liverpool striker Luis Suarez picked up the player of the month award.

The 26-year-old scored 10 goals last month, including a four-goal haul in the 5-1 thrashing of Norwich.

Pellegrini's team entered December on the back of a 6-0 thumping of Tottenham at Etihad Stadium and continued that good league form with a 3-0 win over Swansea.

A narrow 3-2 away win over West Brom was followed by a 1-1 draw at Southampton.

City then beat title rivals Arsenal 6-3,Fulham 4-2 and Liverpool 2-1 before rounding off the month with a 1-0 win over Crystal Palace.

Half of the goals Suarez has scored this season came in December, with the Uruguayan striker netting twice against Cardiff,Tottenham and West Ham before putting four past Norwich.

Manchester City striker Alvaro Negredo, defender Vincent Kompany and midfielder Yaya Toure, Everton midfielder Ross Barkley and Arsenal forward Theo Walcott, who has been ruled out for the rest of the season with a knee injury, were in the running for the December player award.