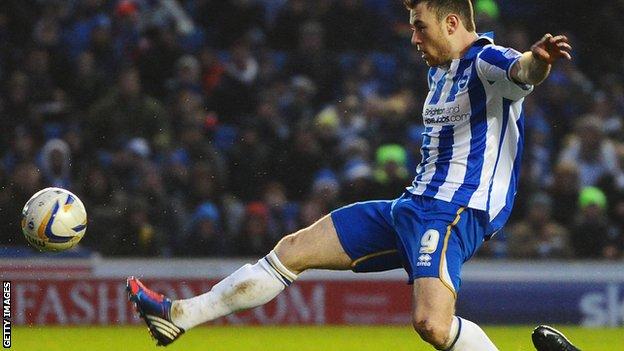 Championship side Burnley have signed striker Ashley Barnes from Brighton for an undisclosed fee.

Barnes, 24, has signed a three-and-a-half-year deal, with his contract at Albion due to expire in the summer.

"Ashley is a robust, hard working centre-forward with an eye for goal," Clarets manager Sean Dyche told the club website.

"He is someone we have known about and monitored for while now. We see him as a strong player coming in."

Barnes joined Brighton from Plymouth in 2010, and went on to make 170 appearances, scoring 53 goals.

The following year - in his first full season at the club - he found the net 20 times to help the Seagulls clinch the League One championship.

With the side sitting second in the Championship behind Leicester, Dyche feels his new front man can add to the quality he already has in his team, as strikers Sam Vokes and Danny Ings have combined to score 25 goals in the league this season.

"It's just been well documented that we need support in that area of the pitch, but we also needed that challenge," Dyche added.

"I can assure you Ashley is not here just to supplement the group and support the front two, but to make sure we have a real challenge up front.

"He has a will and desire to improve and affect football matches, as strikers do by scoring goals."

Last season, Barnes was banned for seven games by the Football Association for violent conduct after he appeared to trip a referee.

He goes straight into the squad for Saturday's game at Yeovil, and will wear the number 30 shirt.