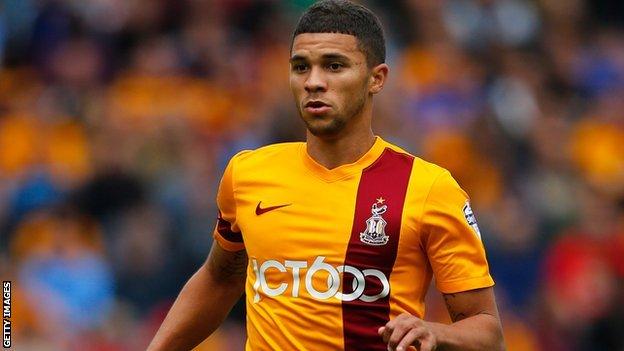 The 23-year-old Bermudan, who has scored 15 goals for the Bantams this campaign, technically joins on loan so he can face Millwall on Saturday and will make his permanent move next week.

Wells joined City in July 2011 after being released by Carlisle.

Last season he helped Phil Parkinson's side to the Capital One Cup final and promotion from League Two.

Huddersfield's previous record signing is believed to be £1.2m for Marcus Stewart from Bristol Rovers in 1996.

Terriers boss Mark Robins said: "At just 23 he has huge potential, which he has proven at Bradford in the last two seasons. He fits into our ethos of buying young, hungry players who have experience and that we can develop.

"His goal scoring record over the last 18 months is hugely impressive and we believe that he is ready to make the step up to the Championship. He will excite our fans and has already shown them what he can do with his goal in the Capital One Cup. I believe he will offer our frontline something different and I can't wait to watch him in action for Huddersfield Town.

"For a young man he has already achieved a lot in his career having reached the Capital One Cup final and promotion with Bradford.

"His achievements and potential meant that he was coveted by a host of Premier League and Championship clubs and I am delighted that he has chosen to join us."