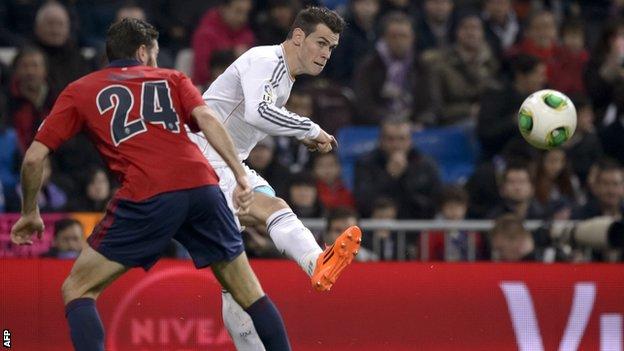 Real Madrid manager Carlo Ancelotti hailed the impact made by Gareth Bale on the Welshman's return from a four-match absence with a calf injury.

Goals from France striker Karim Benzema and young forward Jese Rodriguez put Los Blancos in command of the last-16 tie ahead of next week's second leg.

Bale missed Real's entire pre-season programme as his world-record move from Tottenham was being completed, and he struggled with a foot injury on his arrival in Spain.

The Cardiff-born player made a goalscoring debut for Real against Villarreal in September, before scoring eight goals in seven games following a 2-1 defeat at arch-rivals Barcelona in October.

However, Bale had not played since 14 December before returning in Thursday's win against Osasuna.

"Everyone knows he had injury problems and he is a player that needs to be in optimal condition," added Ancelotti. "For that reason he played the whole game.

"In the second-half the game was more open and it suited him more, but we are all very happy with him."