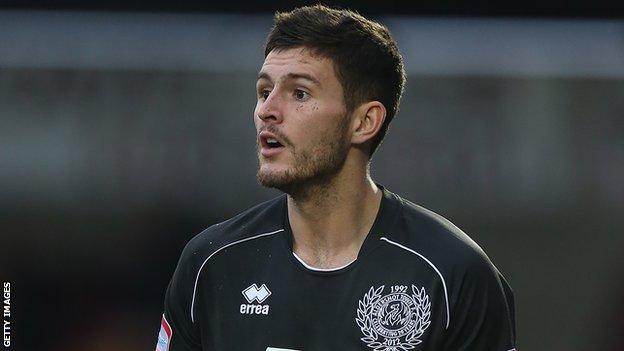 The 24-year-old made 44 appearances for the Shots last season but departed the Hampshire club in the summer after sustaining cruciate ligament damage.

The former Wales Under-21 international, who can also play in midfield, began his career at Cardiff.

"I would have signed Aaron in the summer if he was not injured," Dons manager Neal Ardley said.

He added: "Aaron can play in a number of positions, but he can be a very good centre-back in my eyes,

"When he suffered an ACL injury I sent him my best wishes and said there could be something here for him if he got strong again.

"Aaron is a very powerful athlete and once he gets himself fully match sharp then the fans will see what a good player he is."

Morris joined Aldershot in summer 2010 and went on to make 114 appearances for the club. AFC Wimbledon have not disclosed the length of his contract.

"Been a tough road back but delighted to be back on track and to have signed at AFC Wimbledon," Morris tweeted.

"Good things to come I'm sure."