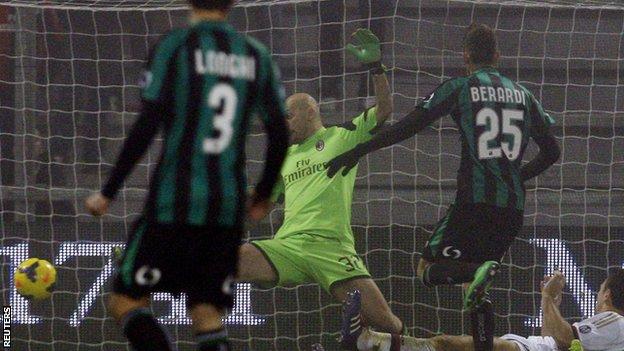 Sassuolo striker Domenico Berardi scored four goals as AC Milan suffered an embarrassing defeat at the minnows in the first meeting between the clubs.

Robinho and Mario Balotelli netted as the 18-time Italian champions raced into a 2-0 lead after just 13 minutes.

Juventus loanee Berardi halved the lead instantly and completed his hat-trick before half-time to put Sassulo ahead.

He swept in again after the break and, after Riccardo Montolivo's late strike, the hosts held on.

AC Milan have lost 17 points from leading situations, a league-high in Serie A this season.

An incredible game almost took another twist as Milan twice hit the woodwork in a tense finale, through Giampaolo Pazzini and debutant Keisuke Honda.

But 19-year-old Berardi's quadruple was enough to move Sassuolo, who are competing in the Italian top-flight for the first time this season, out of the relegation zone.

Milan looked to be easing to a second successive win as they took a 2-0 lead early on. First Robinho kept his calm to angle a ball into the bottom corner from Bryan Cristante's through ball before Balotelli converted from another Cristante pass.

Since 1994-95, Domenico Berardi is the youngest player to have scored four or more goals in a Serie A game and is the only one to have done it against AC Milan.

Berardi pulled a goal back a minute later when he ran through to finish and he levelled just before the half hour mark with a crisp volley.

The striker, who signed for Juventus from Sassuolo in the summer before being loaned back, completed his second hat-trick of the season when he met Alessandro Longhi's cross on the half volley.

His fourth came after the break as he swept home from Jasmin Kurtic's pull-back and Montolivo's late angled drive was not enough to save Milan from a humiliating defeat.

While Sassuolo's official home has historically been the town's 4,008-capacity Stadio Enzo Ricci, this season has seen them ground-share with Reggiana at the Stadio Mapei, some 19 miles away because of league requirements.