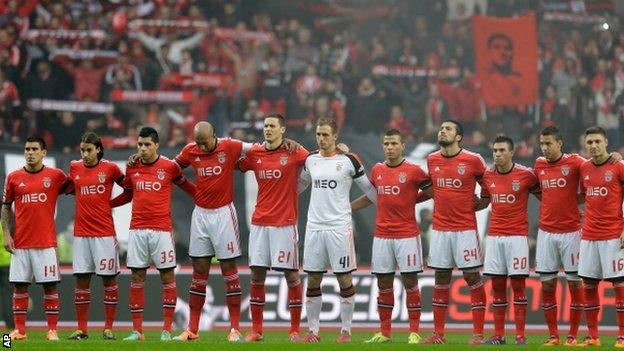 Benfica held a minute's silence in honour of club legend Eusebio before going top of the Portuguese league with a win over title rivals Porto.

Rodrigo Moreno opened the scoring for Benfica before defender Ezequiel Garay doubled the advantage after the break.

Porto played the final 15 minutes with 10 men after Danilo was dismissed for a second yellow card.

Benfica's players all wore the name Eusebio on the back of their shirts, with their usual squad numbers.

The win moved Benfica top, with Sporting Lisbon two points behind and Porto a further point back.

Widely considered one of the best players of all time, Eusebio starred as Benfica won a host of domestic and European honours in his spell at the club between 1960 and 1975.

The 1965 European Footballer of the Year scored 733 times in a professional career spanning 745 matches. He also played 64 times for Portugal, scoring 41 goals.

His death was met with an outpouring of emotion in the country, with thousands of supporters gathering at Benfica's Estadio da Luz for a memorial service on Monday ahead of his funeral.