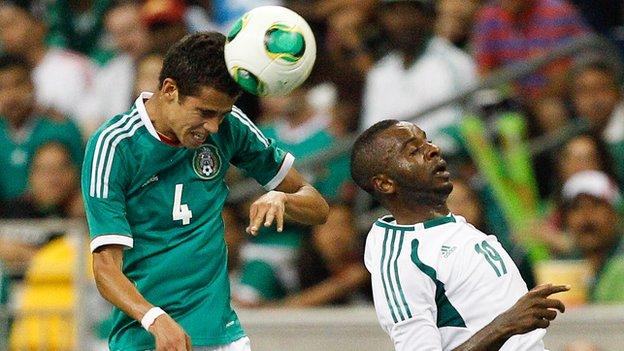 Nigeria will face Mexico in a friendly in the United States on 5 March in their build-up to the Brazil World Cup.

The match will be held at the Georgia Dome Stadium in Atlanta, Georgia.

It will be the second time in 10 months that the sides have met in a friendly in the US - they played out a 2-2 draw in Houston on 31 May.

"This is the first big friendly for the Super Eagles on the road to Brazil," Nigeria Football Federation spokesman Ademola Olajire told BBC Sport.

"With both countries preparing for the World Cup and playing in front of large Nigerian and Mexican crowd, it should spark a great atmosphere in Atlanta.

"It's clear that if we are to prepare extremely hard for Brazil then we need to start playing against strong nations.

"The organisers have gone an extra mile to make this happen because both nations will be competing against teams with similar football culture in the summer, so this should help."

Nigeria face Argentina, Iran and Bosnia-Herzegovina in Group F at the 2014 World Cup, while Mexico play in group A against hosts and five-time winners Brazil, Croatia and Cameroon.

The reigning African champions have not won a match at the World Cup since beating Bulgaria in 1998 and they will hope to avoid falling at the first hurdle - a fate they suffered in both 2002 and 2010.

Despite losing both their opening group games in South Africa four years ago, the Super Eagles still had the chance to reach the last 16 by beating South Korea in their final game, but they were held to a 2-2 draw and finished bottom of the group.

Brazil 2014 will be Nigeria's fifth appearance at a World Cup finals.

Their best outings at the tournament were in 1994 and 1998 when they reached the knockout round of 16.