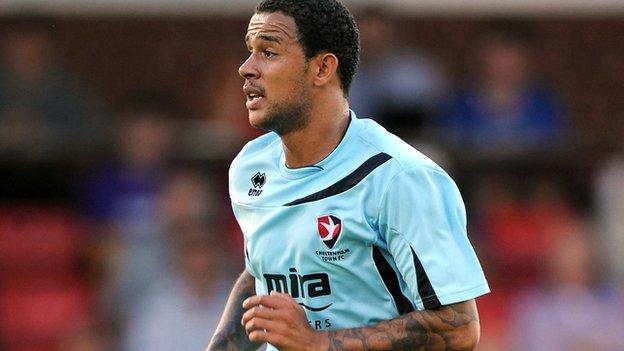 The 21-year-old, who is yet to make a Football League appearance, joins on an initial one-month deal.

Yates, who won the League Two manager of the month award, has also refused to release Vincent after his agent requested a payout.

"I brought Ashley Vincent to be in my team," Yates told BBC Gloucester.

"Ash's agent has been onto me about wanting a settlement, but what is the point of me doing a settlement at this moment in time when all we do is lose a player?

"I've got to make sure it is the right thing for the club, right for me and the team.

"He is in contract until June unless we decide otherwise."

Vincent, 28, re-signed for Cheltenham in July, having made 131 appearances for the Robins during his first spell at Whaddon Road between 2004 and 2009.

He has made just one start in seven appearances this term and has not played since making a substitute appearance in September's 4-2 loss at Torquay.

"Ash has not featured too often for various reasons and it is up to him to stake a claim. It can change in an instant and Ash needs to get his head down," Yates said.

"Ash still has a part to play here if he wants too."