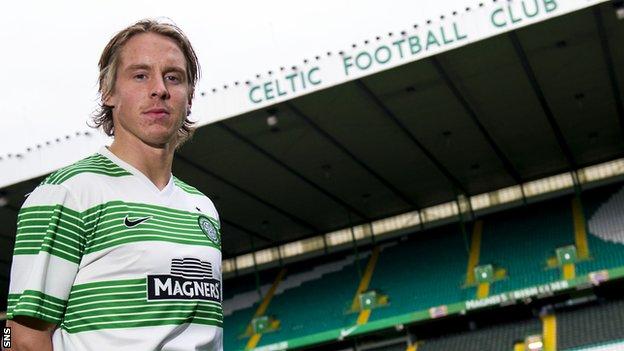 The 23-year-old Stromsgodset midfielder has signed a three-and-a-half-year deal for an undisclosed fee.

Johansen said he was looking forward to playing in a better league in front of the club's "unbelievable" supporters.

The Glasgow club said on their website: "Celtic would like to welcome Stefan and wish him all the best for his career in the Hoops."

Johansen was part of a Stromsgodset side that edged out Rosenborg by one point to win the Norwegian league, scoring four times in 27 appearances during the campaign.

Celtic is one of the biggest clubs in Europe, I'm happy to be here

The midfielder said he expected a higher standard of football in Scotland's top flight.

"The league is better, of course; the clubs in Norway are not even close to being like Celtic," added the Norwegian international.

"It's a fantastic club and I've watched videos about the supporters and you see how much the club means to them.

"I'm looking forward to playing in front of them.

"It means a lot and I'm very happy to be here. It's a fantastic club and I've spoken to some of the guys in the national team about the city.

"Everybody has positive things to say about it and the fans are unbelievable. Celtic is one of the biggest clubs in Europe. I'm happy to be here."

Johansen will wear the No.25 jersey, previously worn by Shunsuke Nakamura and Lubo Moravcik.

"It's an important number," he told the club's website. "But I want to be a player who can improve my game and do my best and succeed, so I'm looking forward to wearing that number.

"But, most of all, I'm looking forward to wearing the Celtic jersey because it's a very important thing for me.

"Celtic fans are known everywhere as being the best in the world, so I'm looking forward to playing for them and I hope I can give something back to them and keep on winning trophies with Celtic."

The midfielder is Neil Lennon's first signing of the January transfer window.