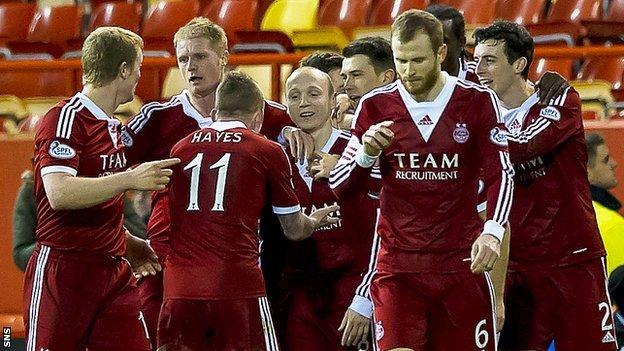 Derek McInnes saluted his Aberdeen side for pulling off a third late win on the trot after beating Hibernian 1-0.

That, combined with recent victories at Dundee United and Kilmarnock, has helped the Dons to a four-point cushion in second place in the Premiership.

"We've scored a lot of late winners recently and that's a sign of a good side who never accept anything other than going the full way," said McInnes.

"We were the team that asked more questions and we got our just rewards."

A brilliant 87th-minute strike by Willo Flood was the difference at Pittodrie, against a Hibs side that were trying to make it six games unbeaten.

"When it's a tight match like that, sometimes you need that bit of quality to win it and separate two teams," McInnes told BBC Radio Scotland.

"Obviously, Willo's come up trumps there - what a great strike. I didn't even know he had that in him, I'm telling him not to shoot from 30 yards and he goes and sails it into that far corner.

"I always feel that we're going to score a goal and I always have that belief. It's more important that the players think that, rather than me. We kept chipping away."

On-loan Swansea defender Alan Tate got a clean-sheet in his debut, with Russell Anderson rested in what is their eighth win out of their last nine games.

McInnes also felt Aberdeen deserved a penalty in the first-half when Peter Pawlett's dinked cross hit the hand of Michael Nelson in the six-yard box.

It is only Hibs' second defeat since Terry Butcher took over as manager in November.

"I'm delighted for everyone tonight," said McInnes. "It was a big game. We know the improvement of Hibs and we know it's always a competitive match against Terry's side.

"I had the belief that that was the team to win the game. I felt that there wasn't the need to change to much."

Recent transfer speculation has had Blackburn Rovers striker David Goodwillie linked with a loan move to Pittodrie, but McInnes played his cards close to his chest.

"I'm not overly anxious to add to the squad, because I think we're getting results," he added.

"If there is anyone out there that I feel can help us in the quest going forward in the remainder of the season, then I would certainly ask the question."