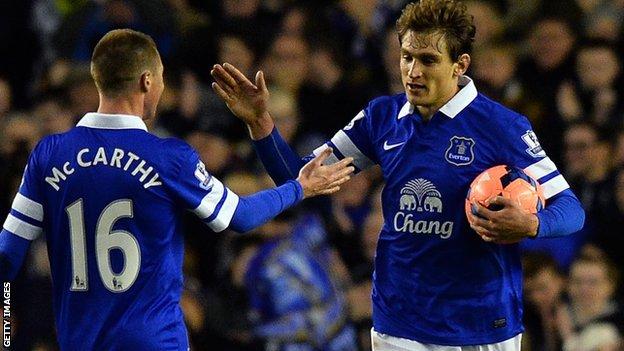 Hull plan to have talks with Everton striker Nikica Jelavic after the two clubs agreed a fee for the Croat.

Toffees boss Roberto Martinez made it clear he would allow the 28-year-old to leave for the right price in January to boost his World Cup prospects.

"We hope we can persuade him to come here," said Hull boss Steve Bruce. "We're trying our best."

Bruce added he was still keen on West Brom striker Shane Long, but that there had only been preliminary discussions.

Jelavic goals since the start of 2013

"We've had a conversation with West Brom about Long's availability at boardroom level but that's as far as that goes at the moment," said the ex-Sunderland manager.

"They've appointed a new manager [Pepe Mel], so I would have thought they would have to have a conversation with him, so we'll see how that develops."

Hull manager Steve Bruce has made attacking reinforcements a priority this month.

The Tigers have scored 22 goals in their 21 Premier League matches this season, with six of those coming in a 6-0 win over Fulham.

Hull's current top-scorer in the league is winger Robbie Brady, who has managed three goals.

Jelavic, who scored twice in the 4-0 FA Cup win over QPR last weekend, joined Everton from Rangers for £5.5m two years ago and scored nine goals in 13 league appearances following his arrival.

But he netted just two goals in the whole of 2013 and has fallen behind on-loan Chelsea striker Romelu Lukaku in Martinez's plans.

"I had agreement with an Niki, that if he could have an opportunity to play between now and the end of the season, and he felt it was the right one, he would be allowed to do that," said the Everton boss.

"I spoke with him and he feels it is what he needs now, to play before the opener against Brazil in the World Cup.

"I do feel there is going to be an agreement, although they are discussing the personal terms."

After joining Rangers from Rapid Vienna in 2010, he scored 36 goals in 55 matches for the Glasgow club.