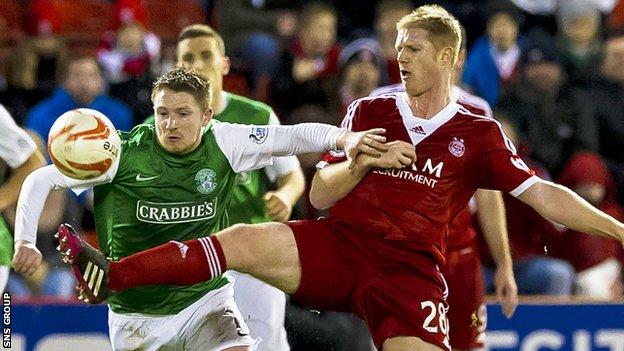 Manager Terry Butcher thought Hibernian's 1-0 loss at Aberdeen was the team's worst display since he took over in November.

Willo Flood's late strike condemned the visitors to just their second defeat in 10 games under Butcher.

"It's a kick in the guts and we have to do far better in possession of the ball," he told BBC Radio Scotland.

"We didn't retain it, we didn't put enough pressure on Aberdeen, we didn't play anywhere near the levels we can."

Hibs looked as if they were holding out for a sixth consecutive game without defeat in a game of few chances until Flood cracked in terrific shot from 22 yards on 87 minutes.

"He should have been shut down but full credit to Willo because it's a magnificent strike and worthy of winning any game," added Butcher.

"But we are disappointed because we didn't do enough.

"We only had one corner which indicates that we didn't apply enough pressure and we didn't retain the ball in the Aberdeen half anywhere near what we would have liked.

"That's the worst we've played since I've been at Hibs.

"It's a harsh reminder that we need to see the game out.

"There has been a lot of inconsistency about Hibs this season and that showed again today.

"But this is a good set of players, a good bunch of lads, and they will bounce back from this."

Butcher has been busy pruning his squad, with Fraser Mullen released and Ross Caldwell going out on loan, while experienced quartet Kevin Thomson, Rowan Vine, Tom Taiwo and Tom Clancy have all been told they are free to move on.

However, he stressed that the search for any new blood will be difficult.

"I really emphasise that it is a really difficult window, a tough period to get in quality that is fit and available at a price we can pay," he explained.

"You don't want to bring someone in and try to get them fit, someone who hasn't played for a while.

"But we have enough quality here. We have shown already that we can live with the best."