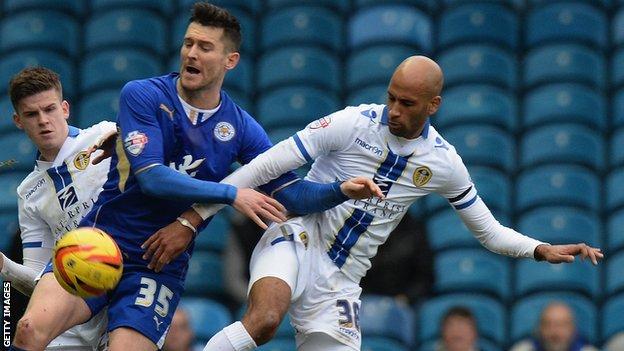 Leeds created a host of chances before the break as they restored pride with a fine display following last week's 6-0 defeat by Sheffield Wednesday.

Ross McCormack hit the post with a header and could have had a hat-trick.

But the Foxes secured a sixth straight league win when Nugent poked the ball past goalkeeper Paddy Kenny.

Veteran striker Kevin Phillips, making his debut as a substitute, was the creator with a brilliant dummy that allowed Nugent to get in on goal and make the most of a lucky ricochet to nick the ball low into the net.

But Leeds manager Brian McDermott, who demanded a performance full of pride and passion after the "humiliating" loss against their Yorkshire rivals last time out, will justifiably feel aggrieved.

His side responded in style to that spanking, playing in the first half with an urgency and quality missing in a winless six-game run.

Top scorer McCormack could easily have had a hat-trick in the first 30 minutes, with Tom Lees and Jimmy Kebe also missing decent headed chances.

But it was McCormack, with 17 goals in 25 league games this season, who had the best opportunities.

The Scot was unlucky with an early header that drifted on to the far post after a fine cross from Luke Varney.

He was also unfortunate to see a clever dinked effort cleared off the line by Matty James, and then the measured curling follow-up turned wide by Foxes goalkeeper Kasper Schmeichel.

But between those chances the Championship's leading goalscorer should have made the most of a one-on-one with Schmeichel. A terrible Paul Konchesky back-pass left McCormack bearing down on goal with plenty of time, but he delayed his shot and the Dane kept his nerve to produce a classy one-handed save.

At the other end Leicester, who blew away Derby in such emphatic fashion last time out, were kept on the back foot by their hosts for long spells but retained a serious threat with the pace and direct running of Jamie Vardy, David Nugent and wing duo Lloyd Dyer and Anthony Knockaert once again prominent.

Vardy hit the post with a fierce cross shot from Ritchie De Laet's pass, while a rising 18-yard drive from Knockaert went just over as the visitors began to look the better side in the closing stages of a gripping first period.

The chances dried up in a more even, but still entertaining, second half.

Leeds have now lost their past five games in all competitions, conceding 13 goals.

They have not won any of their past seven matches and have only scored three goals.

Championship leaders Leicester have won their past six league games and have picked up 25 points from their 13 away fixtures.

Cameron Stewart and Michael Brown both had strikes on goal for the home side while City struggled to create openings despite the constant menace that Knockaert's trickery and inventiveness provided.

But a growing sense among the home fans that their side had wasted too many chances when on top was vindicated with two minutes of normal time left.

James had curled the away side's only effort of the second half effort narrowly wide from long range, but the introduction of Phillips gave fresh impetus to Leicester's attack.

The 40-year-old teed up a chance for fellow substitute Andy King and then cracked a half-volley over the bar, before his dummy from Liam Moore's cross let Nugent in to steal the points.

"That was tough to take. We should have been three-up at half-time.

"The most important thing for me - obviously you want to win, it's so important to win games, and I'm used to winning games in this league - was to restore pride in that shirt and I think the players did that."

"He [Kevin Phillips] has a presence and a reputation, for somebody who's the age he is, to be able to get into a game as quickly as he did.

"It's testament to how he's looked after himself, and it's not just the physical side of it when you get older, to still have that desire and that hunger to play is quite remarkable. There won't be too many players of his ilk and I'm delighted that we've got him.

"He showed an awful lot of intelligence out there. Hopefully that will be important for us in the second half of the season. We made a lot of mistakes, let's be clear on this, it was probably a bit hard on Leeds.

"It depends on how you want to look at it. Some people could argue we were a bit fortunate, or from our perspective we would say that, on a day that it wasn't a polished performance, we showed different qualities and were able to get ourselves out of tricky situations."