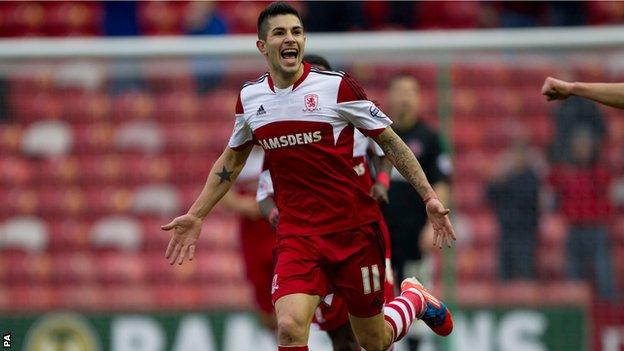 Middlesbrough stretched their unbeaten run in the Championship to six games after grinding out a narrow win against 10-man Charlton Athletic.

Emmanuel Ledesma scored the only goal when his effort bounced over keeper Yohann Thuram-Ulien in the first half.

There were few other chances until a flurry of activity late on after Rhoys Wiggins's red card for Charlton.

Simon Church was inches away from a leveller, before Richie Smallwood's shot was saved at the other end.

The result continued an upturn for Boro since the arrival of head coach Aitor Karanka in November, which now sees them five points off the final play-off spot in ninth.

For Charlton, the defeat saw them drop to 21st, one place above the relegation zone, and left manager Chris Powell awaiting his first victory since Belgian businessman Roland Duchatelet's takeover of the club at the start of the month.

The visitors crafted the first chance of a largely lacklustre affair when striker Yann Kermogant shot wide from 18 yards after being teed up inadvertently by a Dean Whitehead tackle.

Boro took the lead soon after when Argentinean wideman Ledesma sent in a dipping shot from 30 yards that bounced awkwardly in front of keeper Thuram-Ulien and went in.

There was little response from Charlton until the 70th minute, when Church had a goal disallowed after a barge on Boro goalkeeper Shay Given.

Wiggins was soon sent off for a crunching tackle on Whitehead. The disparity did not hold Charlton back, and only Church's failure to reach a Kermogant drive when unmarked near the end prevented them snatching an equaliser.

"I was very happy when the final whistle went because I was really suffering there at the end. It was another three points and another clean sheet so I must be satisfied - but it was not a good game.

"But it was a game that we may have lost in the past and it is another win so that is a good thing.

"And it is a big lesson for us. It has showed how difficult it is to win games in the Championship, how hard you must work to get in front and how hard it is to stay there."

"We started off showing Middlesbrough too much respect but we grew into the game. But things are going against us in games at the moment.

"Simon Church's was definitely a goal for me, it was a brave challenge but a fair challenge - there was no danger, no intent and he got there first. And Rhoys, well, the ball ran away from him and he tried to get it back.

"Things haven't gone well for us but we have to keep battling. It will be a tough second half of the season but if we keep showing that spirit then we will give ourselves a fighting chance in every game."