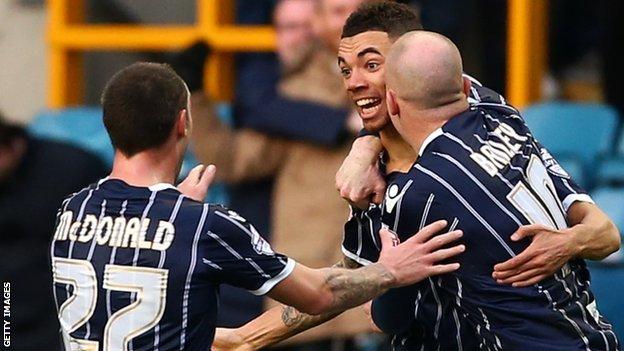 The right-back joined from Tottenham on Friday and scored the eventual winner in fortunate fashion when his cross floated past goalkeeper Dean Gerken.

Tommy Smith almost equalised just after the break but his header was cleared off the line.

Lee Martin missed a late Millwall chance but his side held on for manager Ian Holloway's first win in charge.

The defeat leaves Ipswich, who have not won since Boxing Day, five points off the play-off zone.

Millwall, who had lost six of their last seven games before the match, had an early chance when Liam Trotter curled a shot just wide.

Martin, an Ipswich player last season, wasted a great opportunity for the Lions when he fired tamely at Gerken.

The Town goalkeeper was then helpless to prevent Fredericks from scoring with an overhit cross.

Early in the second half, Smith met Ryan Tunnicliffe's corner with a powerful header, but Martin was well placed to nod the Ipswich defender's effort off the goal-line.

Martin should have made the points safe for the home side late on but he smashed over from 10 yards, having cut inside of Christophe Berra.

"The lads deserved it, we were fantastic. We were up for a fight and we were ready for it. My question to the players is 'where has that been?'

"It was a fluke goal. Ryan didn't mean to do that but I'm just delighted that we held on.

"What I asked for they gave me, and this is the bare minimum."

"We deserved to lose because they played better and we played badly. They played very well to be honest and they have got a very good squad of players.

"The goal came out of the blue and completely changed the complexion of the game.

"Despite everything else, if you let one of them in you aren't going to win. He [Gerken] has just misread the flight of it; he obviously thought it was going over the bar."