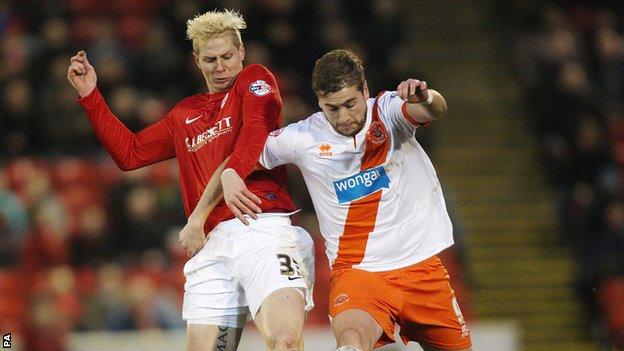 Tykes' top-scorer Chris O'Grady got both goals, opening the scoring with a penalty in first-half injury time.

The points were sealed with a close-range header minutes after the restart.

Blackpool have now lost eight of their last nine Championship games, drawing the other

The success was manager Danny Wilson's first since returning to the club last month, while for Blackpool it was an eighth league loss in nine fixtures.

The Tangerines looked secure in the play-off spots when they beat Sheffield Wednesday 2-0 on 30 November, but have now sunk to 14th with a solitary point since.

Barnsley were not to be denied for long, and after on-rushing midfielder Stephen Dawson was upended in the box by Gilks, O'Grady calmly found the top right-hand corner with the last kick of the opening half.

The advantage was doubled within three minutes of the restart when O'Grady headed in from a Jim O'Brien centre. The goals brought a response from Blackpool, with Tom Ince having a penalty appeal waved away and Chris Basham seeing a powerful effort blocked.

But Blackpool's goalless run extended to a fourth successive league game as substitute Nathan Tyson shot well over at the death.

"I think we fully deserved it. To get three points at this stage is a fantastic return. It just makes people aware that we're not going to lie down and we're still there fighting.

"We had a couple of hairy moments to defend at the end when they were throwing everything at us. Possibly we could have done a bit better with the counter-attacking but overall we defended it really well and I thought, throughout the game, we looked in control.

"It is a tough job but it's not just ourselves, that's the thing. We're not so adrift that we're having to win four or five games to get back into the pack - there's only a couple of wins at most that gets us back in there."