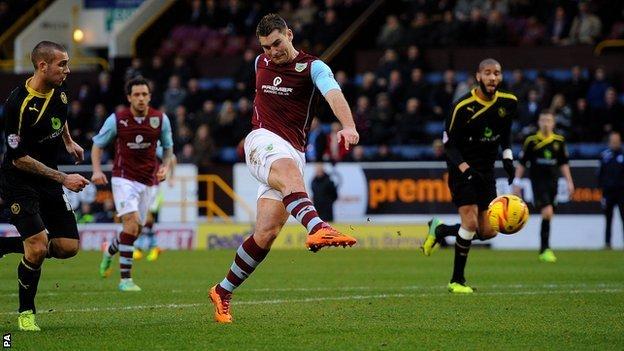 Burnley dropped out of the Championship automatic promotion places as they were held to a draw by Sheffield Wednesday.

Striker Sam Vokes put the home side ahead when he collected a chipped Dean Marney pass and slotted past on-rushing goalkeeper Chris Kirkland.

But the lead lasted barely a minute as Chris Maguire fired in from close range after Burnley failed to clear a Connor Wickham free-kick.

Danny Ings had a chance to win it for the Clarets but his shot hit the post.

The result meant Burnley dropped to third, one point behind second-placed QPR and six points adrift of leaders Leicester.

A resurgent Sheffield Wednesday, meanwhile, extended their unbeaten run to seven games in all competitions.

The Owls had to withstand some early Burnley pressure, which included an Ings drive from distance that was tipped over by Kirkland.

Caolan Lavery shot wide for the visitors and Marney poked an effort wide under pressure at the other end.

Wickham had a long-range strike tipped around the post by Burnley keeper Tom Heaton before Vokes scored his 13th goal of the season to put Burnley ahead.

Almost immediately, Maguire drew the Owls level and only Heaton clawing away a deflected Lavery effort stopped the visitors taking the lead.

Wednesday thought they had been awarded a penalty 11 minutes from time but referee Stuart Atwell booked Maguire for a dive before Ings was denied by the woodwork.

"It was one of those strange ones where we have been totally dominant from start to finish in virtually every level of the game.

"Other than the scoreline, I'm delighted with the performance - we had a plethora of chances. But at sometime in the season we will have to dig in and just get what you can.

"It was a poor goal for us to concede. We'd just scored and given away a soft free-kick which isn't like us and then we didn't deal with a ball into the box."

"It's a difficult place to come.

"They were second in the league and a quality side, probably the hardest-working side we've played with two banks of four which close you down and work their socks off.

"The brief when I took over was to get us out of the bottom three, to keep clean sheets and to score goals, which I've done.

"Credit to the lads. Our game plan was to keep them [Vokes and Ings] quiet and we have done."