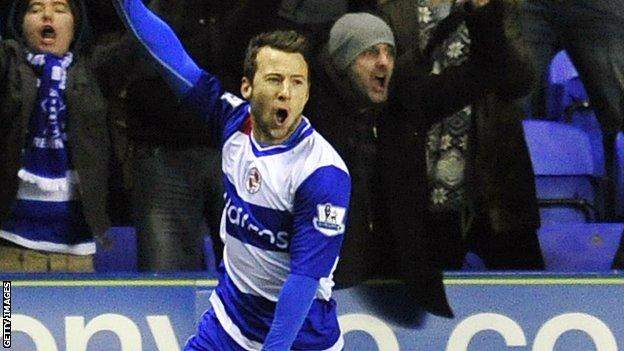 Two close-range finishes and a precise strike by Le Fondre put Reading in control before Pavel Pogrebnyak converted a penalty.

Kaspars Gorkss stabbed in a fifth on the hour, Hope Akpan lashed in from close-range and Nick Blackman's deflected strike made it 7-0.

David Ngog scrambled in a late consolation for Bolton.

It was a demoralising defeat for Dougie Freedman's side, especially after they had shown steady improvement since a poor start to the season.

They had been bottom in September, but went into this game having suffered just one defeat in their last six games.

Reading, meanwhile, had won just one of their last six matches, but were dominant from the outset against Bolton.

It took just 12 minutes for the hosts to get off the mark as Le Fondre pounced on a loose ball to rifle home.

That was Le Fondre's eighth goal of the season and it did not take long for him to add his ninth and 10 goals as he first latched on to Pogrebnyak's smart flick before firing beyond keeper Andy Lonergan and then tapped in from Garath McCleary's pass.

Those goals effectively put the game beyond Bolton, but they conceded a fourth just before the break when Alex Baptiste handled in the area and Pogrebnyak converted the penalty.

The half-time interval offered only brief respite for Bolton, as Reading quickly picked up where they left off with Le Fondre shooting over the bar after good work by Pogrebnyak.

But a fifth goal arrived on the hour as McCleary knocked the ball into the area and Gorkss stabbed in.

The threat of a hefty defeat seemed to spark Bolton into life, but just as they had started to carve out opportunities, Akpan fired into the roof of the net before Blackman added a seventh with a fierce shot that took a cruel deflection off Zat Knight.

Ngog struck late for Bolton but it was scant consolation for what is the Trotters' biggest defeat of the season.

"Whether we are linked to or bring in other forwards is irrelevant. We value Adam [Le Fondre] very highly and if you want to be successful, you need to have a strong group of strikers.

"The way he has performed today was very important to us. Indeed, great credit to all the players today.

"We were very clinical with our finishing and there's a big togetherness here. We didn't allow Bolton to play at all and we're building momentum nicely for an important stage of the season."