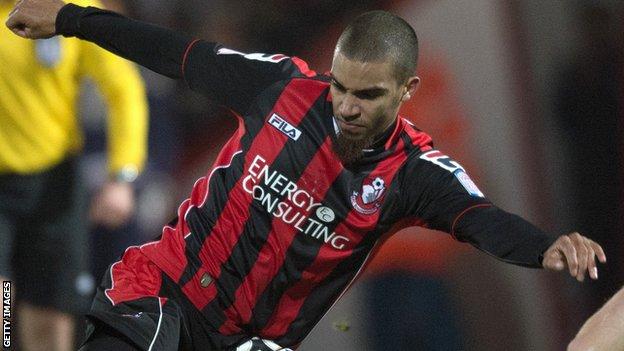 The striker, who signed a new three-and-a-half-year deal with the Cherries in the hours before kick-off, scored a second-half penalty after Gabriele Angella had been sent off.

Angella had put Watford ahead in the first-half with a header, but the visitors struggled after his dismissal.

The hosts were denied a winner when Manuel Almunia saved Grabban's penalty.

It was a pleasing display for Bournemouth, especially against a side who defeated them 6-1 earlier in the season.

Marc Pugh shot over the bar for the Cherries before the visitors deservedly took the lead in first-half stoppage time as Angella's powerful header flew past Camp.

But the complexion of the game changed when Bournemouth were awarded a penalty just after the hour as Grabban tumbled in the area when under pressure from Fitz Hall and Joel Ekstrand.

Goalscorer Angella was given a straight red card and Grabban scored from the spot, with Almunia diving the wrong way.

But Almunia prevented the home side from taking all three points when he kept out Grabban's second penalty of the game after the Spanish goalkeeper had brought down Pugh.

"We got dealt with a sucker-punch right on half-time, which was a killer blow for us, but the response of the players was superb - our second-half performance was brilliant.

"You can go into half-time on a downer but credit to the players, they came back really well."

"If you have to give ratings as a journalist, I think you should give 10, eight or nine.

"I think it was not only Almunia but the whole team who played well today.

"I think it is very strange to concede two penalties in 45 minutes, for me, that has never happened before - especially with 10 men. It is too far for me to judge from the touchline."