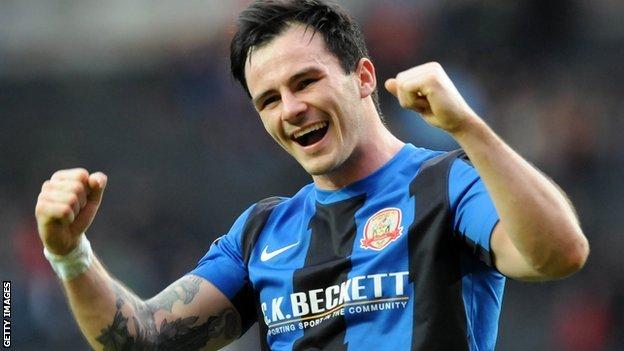 Two goals on his debut from substitute Chris Dagnall sent Leyton Orient top of League One as they came from behind to win at Crewe.

After a goalless first half, the Alex went ahead when Byron Moore poked in from close range after Chuks Aneke's shot was blocked.

Former Barnsley striker Dagnall, a free transfer signing, levelled with a fierce finish from the edge of the box.

Dagnall then grabbed the winner when he tucked home Mathieu Baudry's cross.

The win was the O's fourth in their last five league games as Crewe lost for the first time at home since November.

"It was a hard-earned performance in terms of getting a result and Crewe were excellent. They put us under pressure and we had to come from behind again.

"In the last five minutes the fans counted for us. They were right behind us."

On debutant Chris Dagnall: "Two inspired finishes. That's what he is about.

"He is lively and can get behind people and link up with others and he will prove to be a great acquisition to the club.