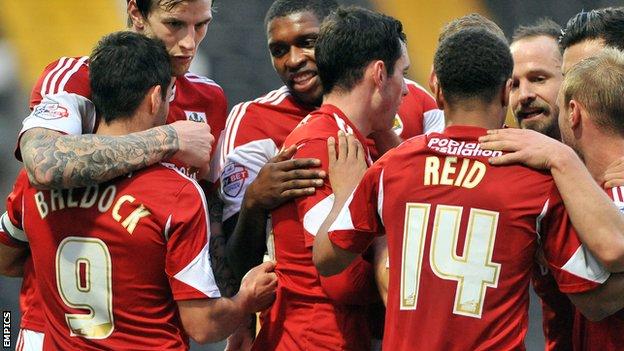 Sam Baldock scored twice for Bristol City against his former club MK Dons to earn a point in League One.

The visitors had opened up a two-goal advantage in the opening period through Shaun Williams's effort and a sublime Ben Reeves chip.

But, having missed a host of chances in the first half, Baldock scored his first just before the hour mark, lashing into the roof of the net.

And he equalised on 76 minutes after the Dons failed to deal with a corner.

A draw leaves Bristol City in the relegation zone, two points off safety, while MK Dons lie in 10th position.

"It's better than losing 2-0, that's for sure, which was a position we found ourselves in that we shouldn't have done, we should have been 4-0 up.

"We could have scored after a minute, then we had two chances and the keeper has made saves. Greg Cunningham has had a chance, the game could have easily have been 4-2 by half time.

"I'm only giving the benefit of the doubt with the two goals because, just five minutes before their goal, I've written down concentrate, dash, counter attack and that's what they scored on.

"I think it's an absolute travesty that we haven't won that game. I think they're a very good team and it was an interesting game. I thought we were the better team today and deserved three points."

"Once we got over that first 15-minute period, I thought we dominated a large part of the game.

"Steve Cotterill's got a great side here, a really difficult team to play against. When you've got strikers and the quality that they have, they're always going to score goals.

"Ironically I thought we defended better second half than first half, even though we conceded the goals, but I think they were the only two chances they had.

"I thought Chris Long was magnificent today, on his own up front, he got three or four chances and worked the channels."

"We're disappointed to come away with a point, but respectful of this side."