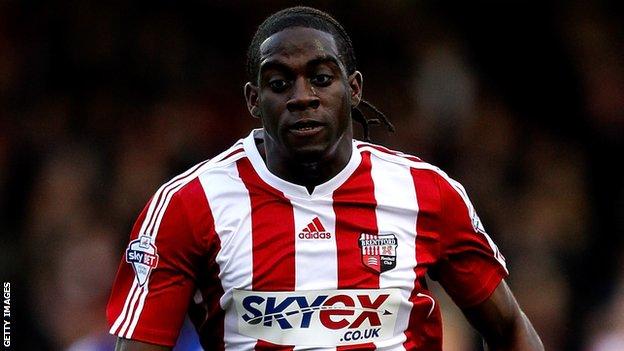 Brentford slipped off the top of League One as their eight-match winning streak ended at Walsall.

The Bees took the lead just before the half hour when Jake Bidwell crossed for Clayton Donaldson, who glanced a header into the bottom corner.

The Saddlers drew level just before the break when Milan Lalkovic headed across goal and Craig Westcarr nodded in.

Romaine Sawyers went close to winning it for the home side but David Button tipped his shot over the bar.

Brentford last lost a game in League One when they were beaten 2-1 at Stevenage on 12 October.

The Bees have won 13 of their last 15 league matches.

Brentford started the day looking to match a club record of nine consecutive league wins, which was set in 1932.

Donaldson's 49th league goal for the Bees looked to have set them on their way but Westcarr's header extended Walsall's unbeaten run to five games.

On-loan Brentford striker Marcello Trotta sent a half-volley over the bar in the second half as the visitors searched for a breakthrough.

Both sides came close to winning the match late on, with Westcarr firing over from close range and Brentford substitute Stuart Dallas dragging a left-footed shot inches past the post.

The Bees stretched their unbeaten run to 15 matches but drop to second place after Leyton Orient won at Crewe.

Walsall slip out of the play-off places on goal difference, with Peterborough replacing them after they beat Tranmere.

"It was a tough game today and Walsall worked hard and moved the ball well - 1-1 was a fair draw.

"It's a squad game. The players who came in did well and the squad has shown its quality over the last few days.

"We have Gillingham in our sights and that's our only focus now."